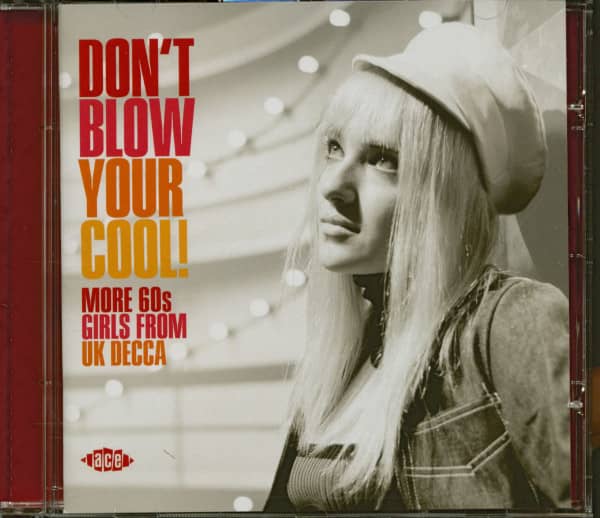 Back in 1986, Ace became the first reissue company to test the waters of the Brit Girl collectors market with “Girl Zone”, a vinyl compilation of feminine gems from Decca Records’ 1960s catalogue. It was something of a gamble: the music of the era’s British girl singers wasn’t an acknowledged genre then, and no-one really knew whether there was any demand apart from a few devotees. Happily, reaction was positive, and the album sold well. In more recent times, “Love Hit Me! Decca Beat Girls 1962-1970” became one of Ace’s top-selling CDs of 2016, and was followed by similar collections drawn from Pye and EMI’s Brit Girl roster. Having established that there is still a demand, we now present “Don’t Blow Your Cool!”, our latest sumptuously packaged all-female Decca anthology.

Along with a hand-picked selection of proven fan favourites, the collection features a generous ten new-to-CD titles. These include the rarely heard French language recordings of ‘Summer Nights’ by Marianne Faithfull and ‘You Just Gotta Know My Mind’ by Dana Gillespie; Billie Davis’ great recording of ‘Me About You’ from her Decca album; visiting American jazz singer Joy Marshall’s soulful cover of Roy Hamilton’s ‘Heartache Hurry On By’; folk rocker Beverley with two songs penned by her friend Donovan; ‘The Spark That Lights The Flame’ by Northern Ireland’s Margo, lead vocalist of the Marvettes; ‘Backstreet Girl’ by singing actress Adrienne Poster; ‘Mr Scrooge’ by much-loved teenage girl group the Orchids; and, with her James Bond-style theme from cult favourite TV series Adam Adamant Lives!, lip-gloss queen Kathy Kirby.

As usual with our series of Brit Girl releases, the CD comes with a colourful picture-packed 24-page booklet. Track selection and copious notes are by myself and girl-pop buff Ian Chapman (just like back in 19
86).  Mick Patrick