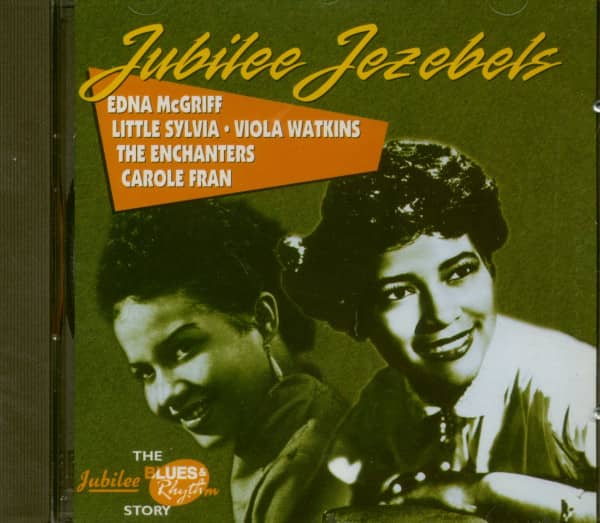 (Sequel Records) 24 tracks Jubilee 1952-64 (64:23) with 12 page booklet. Little Sylvia, Edna McGriff, Viola Watkins, Enchanters, Carole Fran a.o.
& ,-
Purchased by the singer and band leader Jerry Blaine from his then partner Herb Abramson in September 1947 out of the profits of the former's short-lived 'It's A Natural' label, Jubilee Records' longevity was founded solely on the enormous success of it's vocal group releases by Sonny Til and The Orioles, The Four Tunes and, later on the sister-label Josie, The Cadillacs. But unlike most of the independent record companies founded in the doo wop era on the back of the vocal group boom, jubilee had so much more to offer as this and the accompanying batch of releases prove.

'Jubilee Jezebels' contributes a couple of dozen tracks by the company's fine roster of female singers, including four cuts by the all-woman vocal quartet The Enchanters. These titles were all recorded during 1951 to 1953, except for Carol Fran's sides which were released in 1964 on the Port label, but Fran's timeless vocal and the peerless accompaniment by the big band of swing and R&&,B veteran Sammy Lowe, make these sides indispensable.

For the first three or four decades of the recorded blues and jazz, women played a major part in black music's popularity, indeed in the 1920s and '30s, women like Ida Cox, Ma Rainey and Clara and Bessie Smith were the music's first superstars - in fact arguably the first recorded blues was by a woman, Mamie Smith. These pioneers were followed in the '30s and '40s by consummate jazz blues singers such as Billie Holiday, Ella Fitzgerald, Helen Humes and Dinah Washington, who in turn gave way to a new wave of fresh R&&,B vocalists in the late '40s and early '50s.

Since the late 1950s, blues, and to a lesser extent soul and jazz has been dominated by male singers and shouters, so as an antidote we offer here a generous collection of that last new wave.