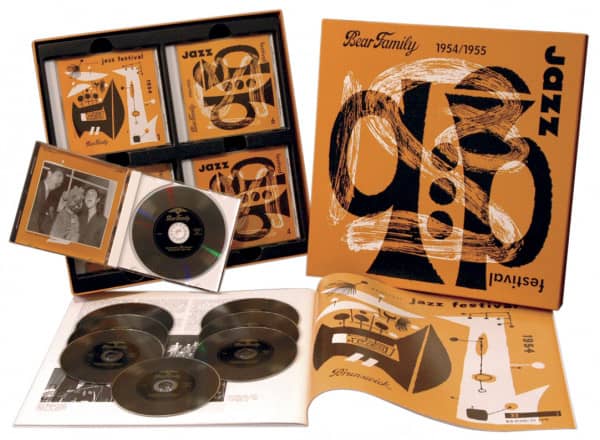 The third German Jazz Festival in 1955 was a four-day event that featured nearly 30 groups and soloists. It was recorded by Deutsche Grammophon for release on Brunswick, but only parts of it were released on long-deleted EPs. The complete tapes survived though. The 1954 festival was also recorded, but only the portion issued on an EP was saved. Now the surviving portion of the 1954 festival and the entire 1955 festival are issued complete by Bear Family on eight CDs. The book includes complete documentation, discographical details and rare photos. It's a complete picture of the German jazz scene from the mid-Fifties, ranging from Trad (Spree City Stompers, Two Beat Stompers) to Swing (Paul Kuhn, Heinz Schoenberger, Glen Buschmann, Helmut Weglinski), to Jump (Delle Haensch), and Cool Jazz (Jutta Hipp with Albert Mangelsdorff, the Helmut Brand Combo with its Baker-Mulligan sound, and Wolfgang Lauth ). Also present were vocalist Wolfgang Sauer, and the 'Third Stream' sound of the Harald Banter Tentet. Both preeminent German big bands were there (Kurt Edelhagen with Caterina Valente and Erwin Lehn). This is an absolute Must-Have item for anyone interested in German jazz.

100 Years of Jazz in Germany

The renowned team of researchers and authors Horst H. J. Bergmeier and Dr. Rainer E. Lotz presents the first comprehensive documentation of the history of jazz in Germany - on a total of 12 CDs with elaborately restored, rare original sound documents. Beginning with early recordings of the prehistory of 1899, the development of Cake-Walk and Ragtime is documented, followed by a documentation of the Golden Twenties of the Weimar Republic, of Swing, of Jazz under the Swastika, of the rubble jazz of the post-war period in the two German states, of Cool Jazz and traditional Jazz up to the latest developments of avant-garde music.

This compilation of the best recordings of the best and most interesting soloists and orchestras also includes foreign stars on tour. For the first time, contemporary music machines and piano reels in hi-fi quality are also included. The booklet accompanying each CD box contains richly illustrated notes on the music, performers and composers, as well as the social environment. 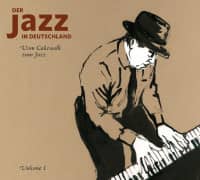 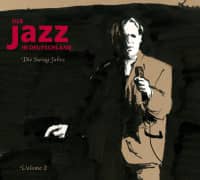 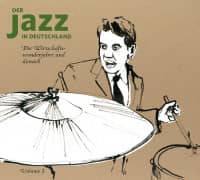 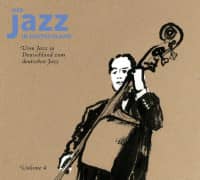