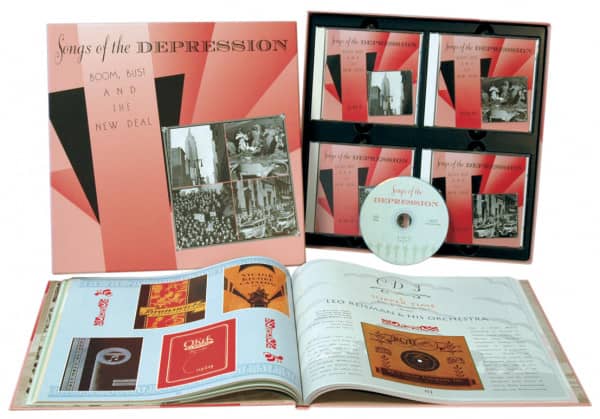 To paraphrase Charles Dickens, it was the worst of times; it was the best of times. The twelve year period from October 1929 to December 1941 stretched the fabric of American society to its limit. Only the policies of the New Deal - born more of desperation than conviction - prevented to the country from toppling into anarchy and totalitarianism. And yet, amid the misery and deprivation, something wonderful happened, like a garden blooming on a stretch of wasteland. While the economy of the country withered, creativity soared and the arts in America came of age. Never, before or since, was there such an explosion of talent in  the theatre, motion pictures and popular music.

'Songs Of The Depression: Boom, Bust And The New Deal' examines the effects of the Crash through the medium of the popular song. Starting with the insanity of the stock market boom in the late 1920s, it tracks the muddle-headed and often absurd false-optimisim policies of the government in the early months of the crisis, through the grim realization of the people that government had failed them, to the exaggerated euphoria and youthful irreverence of the New Deal era. The crazy mood swings of the period are reflected in 88 songs like Eddie Cantor's Tips On The Stockmarket, Al Jolson's
Hallelujah I'm A Bum, Ruth Etting's 10 Cents A Dance, Vincent Rose's There's No Depression In Love, Lee Morse's I'm An Unemployed Sweetheart, Gene Kardo's If I Ever Get A Job Again,
Connee Boswell's Boulevard Of Broken Dreams, and Louis Armstrong's duet with the Mills Brothers on WPA. And, of course, Bing Crosby performs the Depression's most poignant anthem,
Brother Can You Spare A Dime. The music of the greatest and lesser stars of the 1930s forms a rich tapestry that chronicles an era better than any history book.