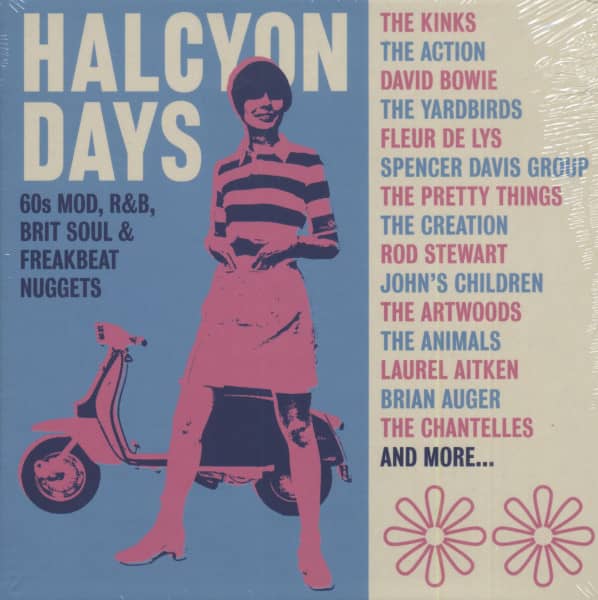 Please inform me as soon as the product is available again.
$32.87 *

(Strawberry) 87 tracks, slipcase
Strawberry picks up where the powerful RPM Records left off and will shed light on collectable recordings from the 1960s and 1970s, from thematic compilations to anthologies of individual artists and occasional reissues of albums.

Halcyon Days is inspired by the custom RPM compilations Looking Back, Keep Lookin' and Night Comes Down. It traces the evolution of mod-friendly beat music on three CDs of jazzy R&B by Chris Farlowe, Duffy Power with Graham Bond and Zoot Money, opening the first CD with hornloaded Brit-Soul by Jimmy James, Geno Washington and The Richard Kent Style, Ska by Mickey Finn & The Blue Men, Girlgroup-Pop by The Chantelles and fluffy freakbeat by The Pretty Things and The Worrying Kynde.

On the third disc, the influence of psychedelia is evident in the performances of Jason Crest, July and Dantalian's Chariot.

Bands featured include The Animals, The Yardbirds, The Kinks, The Pretty Things, The Creation, The Action, The Artwoods, John's Children, The Spencer Davis Group, Brian Auger & The Trinity and The Fleur De Lys.

There are early singles from future superstars David Bowie and Rod Stewart and early recordings of Jimmy Page with Mickey Finn & The Blue Men and alongside Jeff Beck in The Yardbirds, Steve Howe in The In Crowd, Greg Lake in The Shame and Jack Bruce and Ginger Baker in the Graham Bond Quartet. Mick Fleetwood drums with The Bo Street Runners, future Deep Purple guitarist Ritchie Blackmore supports Heinz, his Purple bandmate Jon Lord is organist with The Artwoods, Rolling Stone Bill Wyman produces The End and Denny Laine, who later joined Paul McCartney in Wings, sings with The Moody Blues .

Rarities available on CD for the first time include British R&B, soul and mod beat tracks from The Athenians, The Fingers, The Candy Dates, Barney J. Barnes & The Intro, Kevin 'King' Lear, Dorian Gray, Barry St. John, Ray French, Laris McLennon and Sleepy. There are also previously unreleased recordings by The SW4, The Union and The Trendbender Band.