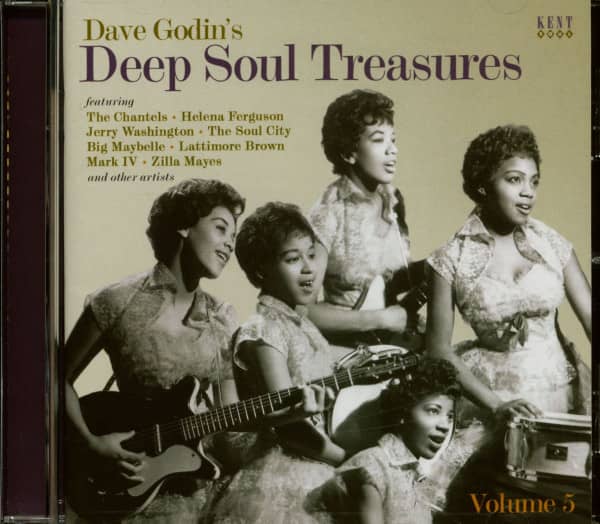 (Kent Records) 25 tracks
15 years on from “Dave Godin’s Deep Soul Treasures Volume 4”, and from Dave’s death, we present the next 25 sides of significance – selected by Dave, including some he wanted from day one of the series.
It was 1995 when Dave approached me to compile his “Deep Soul Treasures” CD series. He was emerging from a few years away from the scene, and had just started to write about soul music again in a column for Dave Rimmer’s Soulful Kinda Music magazine. The next year, he would contribute sleevenotes for our first “Birth Of Soul” CD which I had compiled with Ace Records director Trevor Churchill, a friend of Dave’s from the 60s. I had read Dave’s columns avidly in the early 70s but had not known him to any degree until he contacted me, thanking me for the inclusion of the Just Brothers’ ‘She Broke His Heart’ on Kent’s “Soul Cities” LP. After developing a working relationship with Ace, he and I began work on the “Treasures” series with the Just Brothers featuring on the opener.

We worked together on the series over nine years, almost continually given the meticulous detail Dave applied to the CDs and the licensing hurdles we had to clear to keep the standard up. Dave often said the CDs were the pinnacle of his work with soul music, which was some claim, given the illustrious history he had with the genre. I know how much it meant to him from travelling to his bedside in Rotherham only months before his death and being given instructions for the completion of the fourth volume. It was manufactured only a couple of months before his passing, but he got to see his final contribution to the music he adored.

We have not hurried this subsequent volume as it would have been unseemly to cash in on the outpouring of tributes to Dave after his death, but he left lists of tracks he felt were worthy of inclusion. For him it was the promotion of the music as an art form that was paramount, and he would be glad his work was being continued. As the years passed, we managed to get licensing rights to some of the tracks he had considered most important from the outset. The Emotions track he had always chased came about due to the hard work of Chicago soul enthusiast Dave Box who developed a relationship with label-owner Hillery Johnson. Similarly, Cameo-Parkway had been a tricky license until recent years, and Compass label-owner Micky Kapp was finally tracked down with the help of the worldwide web.

The accompanying booklet is enhanced by an extensive interview Dave gave to Jon Savage in the 90s; Jon also writes an introduction. Where relevant, Dave’s own words, mainly from his magazine columns of the time, are used in relation to the recordings, and an array of guest writers including Stuart Cosgrove, Sean Hampsey, David Nathan, Tony Rounce, Richard Searling and Richard Williams contribute notes for each of the tracks – often with reference to Dave’s championing of them.