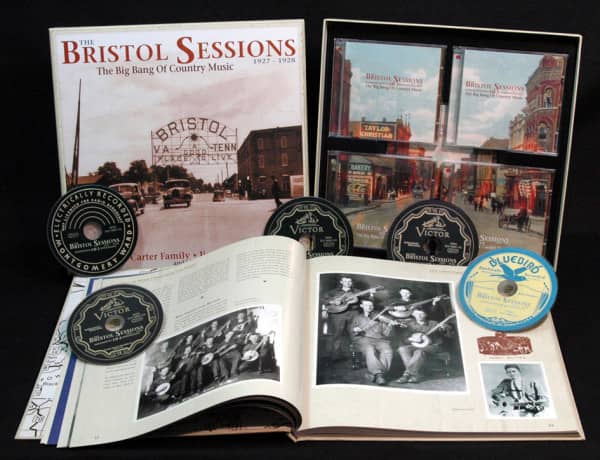 'The single most important event in the history of country music.' (JOHNNY CASH, on the 1927 Bristol sessions). This is the foundation of country music! An unsurpassed storehouse of traditional American music, featuring the first recordings by the Carter Family and Jimmie Rodgers. The legendary Bristol Sessions issued complete for the first and only time, including the ultra-rare follow-up sessions from 1928!

The recording trip made by Victor Records to Bristol, Tennessee in July-August 1927 was a defining moment in country music. Producer Ralph Peer found two acts that acquired national and international fame: Jimmie Rodgers and the Carter Family. But more than a hundred other recordings were made at the Bristol sessions of 1927 and '28. There were ballad singers, street evangelists, string bands, gospel quartets, harmonica virtuosos, Holiness preachers, blues guitarists and rural storytellers. A snapshot of rural American music was caught in an era of rapid change: pictures of a past almost beyond recall, but preserved for ever in these magnificent recordings.

The five CDs in this set gather every surviving recording from these sessions, including alternative takes. The accompanying 120-page, LP-sized hardcover book contains newly researched essays on the background to the sessions and on the individual artists, with many rare and unpublished photographs. Also included are complete song lyrics and a detailed discography, illustrated with reproductions of the original recording sheets.

On the morning of Wednesday, July 27, an editor of the 'Bristol News Bulletin' sat in the makeshift recording studio listening to Stoneman and other members of his family perform some traditional songs, including the well-known children's song Skip To Ma Lou, My Darling. At the outset of the Bristol sessions, Peer was concerned that he had not initiated sufficient advance publicity for his recording activities, of the 19 acts who would record at Bristol in 1927, he had signed only 10 before the sessions began. In order to increase community involvement in his work, Peer invited the newspaperman to watch a recording, hoping that he would be prompted to write about it. The editor duly did so in that evening's edition. He was particularly impressed that Stoneman and his family and friends were earning a substantial amount of money at the sessions: "The quartette costs the Victor company close to $200 per day—Stoneman receiving $100, and each of his assistants $25. Stoneman is regarded as one of the finest banjoists in the country, his numbers selling rapidly. He is a carpenter and song leader at Galax. He received from the company $3,600 last year as his share of the proceeds on his records." For comparison, the average annual wage in 1927 was $1000 a year—and considerably less in the rural South.

According to Peer, "The story worked like dynamite and the very next day I was deluged with long-distance telephone calls from the surrounding mountain region. Groups of singers who had not visited Bristol during their entire lifetime arrived by bus, horse, and buggy, train or on foot." Not all of the people who journeyed to Bristol passed Peer's audition, yet among the musicians who learned about the sessions from the newspaper article (whether the original or a syndicated republication) were such acts as the Alcoa Quartet, Mr. and Mrs. J. W. Baker, the Bull Mountain Moonshiners, the West Virginia Coon Hunters, and three Kentucky-based musicians: Ernest Phipps, Alfred G. Karnes, and B. F. Shelton. The most significant act to hear about the sessions from the article, though, was a stringband comprising four musicians who had recently been performing around Asheville, North Carolina. Three of them—brothers Claude and Jack Grant and Jack Pierce—were from Bristol, and they learned about the recording opportunity there from Pierce's family. The fourth member of the group was its lead singer, the future country music luminary Jimmie Rodgers, from Meridian, Mississippi.

Several musicians involved in the Bristol project were gathered by other means. Weeks before the sessions were to begin, Peer had contacted two acts he had already recorded, to invite them to participate: Ernest Stoneman, and the Johnson Brothers, a duet that featured a Hawaiian steel guitar. Additionally, in June 1927, Peer made a scouting trip to Bristol in advance of the sessions, at this time, a local Victrola dealer, Cecil McClister, connected Peer with the Carter Family, a group based in nearby Maces Spring, Virginia. McClister also advised Peer to record a West Virginia-based musician, Blind Alfred Reed. Henry Whitter, an established performer whom Peer had recorded for OKeh, came to Bristol from his home in Fries, Virginia, at Peer's personal invitation.
v The 1927 Bristol sessions lasted from July 25 to August 5. Peer recorded 19 separate acts and obtained 76 items, 69 of which were issued. Today, these recordings—even those by now obscure musicians—are generally judged to have been technically excellent for the era in which they were made. Utilizing state-of-the-art equipment (notably, the recently introduced Western Electric microphones), Peer and his engineers ensured that the sound quality improved upon that of previous 'old-time' recordings. Even more importantly, two of the most influential acts in country music history, Jimmie Rodgers and the Carter Family, made their first recordings during the Bristol sessions.

Music historian Charles K. Wolfe, who analyzed the sessions, asserted that, of the 76 recordings made by Peer in 1927, approximately 35 featured music that could be considered 'traditional,' the remainder capturing music that originated from commercial sources. According to Wolfe, 31 of the 76 recordings were sacred songs, of the rest, 34 were secular-themed songs, seven instrumentals, and four stringband dance tunes with incidental lyrics.

Victor would release all but seven of the recordings made at the 1927 Bristol sessions, and several of those records sold remarkably well. Some of the more well-received releases from the sessions were gospel numbers by Ernest Phipps and Alfred G. Karnes, while best-selling secular numbers included the Carter Family's Single Girl, Married Girl, which was coupled with the now classic country music standard The Storms Are On The Ocean. ,

Great, historic. memorable event, captured in this 1 boxed set . A must for any lover of the genre.

Amazing though. In the synopsis/write up, no mention of the one musician who played a key role in bringing these sessions to Bristol, and the fact that he has 14 tracks, and his family have 6 tracks in the box set. WHY? Sadly it has to be an oversight, or is there another reason?

This box set stands as an important contribution to the study of country music, and vernacular music in the United States more generally.
Cambridge Journals 11.06.13 Travis D. Stimeling

All in all, Bear Family has done a very thorough job here. Highly recommended!
The Old-Time-Herald 3/2012 Jim Nelson

The 1927 recordings include the first ever by Jimmie Rodgers and the Carter Family - history enough for one week!
US-Rolling Stone Dec. 2011 David Fricke

Surely a cert for a nomination of some kind at the next Grammy Awards.
Mojo 3/2014 Fred Dollar