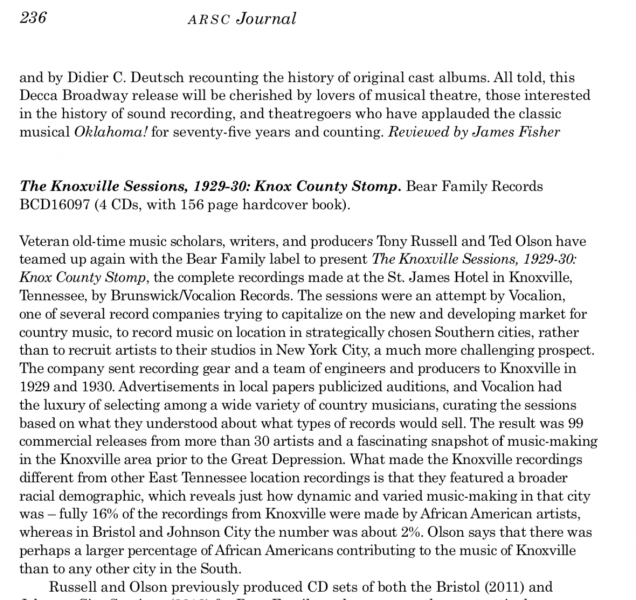 Veteran old-time music scholars, writers, and producers Tony Russell and Ted Olson have teamed up again with the Bear Family label to present The Knoxville Sessions, 1929-30: Knox County Stomp, the complete recordings made at the St. James Hotel in Knoxville, Tennessee, by Brunswick/Vocalion Records. The sessions were an attempt by Vocalion, one of several record companies trying to capitalize on the new and developing market for country music, to record music on location in strategically chosen Southern cities, rather than to recruit artists to their studios in New York City, a much more challenging prospect.

The company sent recording gear and a team of engineers and producers to Knoxville in 1929 and 1930. Advertisements in local papers publicized auditions, and Vocalion had the luxury of selecting among a wide variety of country musicians, curating the sessions based on what they understood about what types of records would sell. The result was 99 commercial releases from more than 30 artists and a fascinating snapshot of music-making in the Knoxville area prior to the Great Depression. What made the Knoxville recordings different from other East Tennessee location recordings is that they featured a broader racial demographic, which reveals just how dynamic and varied music-making in that city was – fully 16% of the recordings from Knoxville were made by African American artists, whereas in Bristol and Johnson City the number was about 2%. Olson says that there was perhaps a larger percentage of African Americans contributing to the music of Knoxville than to any other city in the South.

Russell and Olson previously produced CD sets of both the Bristol (2011) and Johnson City Sessions (2013) for Bear Family and are among the most articulate writers about a broad range of issues concerning old-time music – they were nominated for a Grammy Award for the notes from this boxed set. The collection contains all 99 tracks on four CDs, plus a large 156-page hardcover book of essays, rare photos and documents, artist biographies, lyrics, studio sheets, and indexes. The sessions are presented chronologically, as they happened. It is interesting to note that fully one-half of the output from Knoxville can be attributed to professional songwriters (commonly referred to as Tin Pan Alley) and that only 14% of the material here can be considered traditional. All these years later it would be easy to look back on the artists from this time and the sounds they were making as being connected to a timeless wellspring of authentic country music bubbling up from the hollow, but most often commercial artists and/or the producers who were directing them were interested in what they perceived would sell. A proven method for selling records at the time was to “countrify” the pop hits of the day, and this collection features many excellent examples of that process.

This is a collection that is full of guitars, banjos and fiddles – but there are alsobrass instruments, a zither, and pianos. There are just a handful of songs from sacred singers (several were recruited to make records, but most had their efforts rejected),solo artists and duets, and a lot of string band music. Vocalion producer Dick Voynowrecorded four family string bands on his first day in Knoxville: the Tennessee Ramblers (Sievers Family), the Southern Moonlight Entertainers (Rainey family), Ridgel’s Fountain Citians (Ridgel family), and the Wise String Orchestra (Wise family), all very good local groups. One of the two numbers recorded by the Wise String Orchestra was “Yellow Dog Blues,” a tremendous piece of fiddle music and a highlight of this collection. “L&N Rag,” a popular fiddle tune in old-time music circles today, was first recorded during these sessions by Alex Hood & His Railroad Boys. Slim Miller, who later fiddled with the well-known Cumberland Ridge Runners, recorded in Knoxville with the

Smoky Mountain Ramblers, a superb band that showcased not only Miller’s virtuosic fiddling but also stellar singing by Hugh Cross. Cross went on to have a long career as a singer and songwriter, and he recorded with Riley Puckett and other Georgia stalwarts including fiddler Lowe Stokes, who is featured here in a comedy skit. One of the earliest- born fiddlers to make sound recordings, Uncle Jimmy Thompson (born 1848), recorded “Lynchburg” and “Uncle Jimmy’s Favorite Fiddling Pieces” (“Flying Clouds” and “Leather Britches”) in Knoxville, and died less than a year later.

For all the good fiddling on this collection, the singing is what sets it apart. An early version of the brother duet group Mac and Bob recorded a handful of songs including “The Mansion of Aching Hearts,” and they are in fine form here. The aforementioned Hugh Cross is stellar in everything he sings, especially “Won’t You Waltz Home Sweet Home With Me,” “Back to Old Smoky Mountain,” and “San Antonio,” in which he sings about his gal running away with Tony on a pony. The Gibbs Brothers with Claude Davis contribute strong songs and singing, including an excellent early brother duet-style number, “Goodbye Dixie Dear.” The female singers Leola Manning and Bess Pennington are also highlights, the latter a rare female solo act from Southwest Virginia, about whom very little is known. There are two recordings of her and one photograph in existence, all presented in the set. Of the African American artists, Leola Manning, a fantastic blues singer who recorded her original songs in Knoxville, is surely a standout. Also included are the Tennessee Chocolate Drops, a well-known trio who represented the very best of black string band music in the twentieth century, and Georgia/Tennessee bluesman Will Bennett–researched here for the first time–who recorded the first-ever version of “Railroad Bill.” His version may still be thebest performance of this song after all these years.

The extensive liner notes are very effective at putting things in context. The introductory essay describes the early history of Knoxville and the various forces that had, by the late 1920s, shaped Knoxville into a thriving and diverse city of more than 100,000 people. We learn of the Woodland Indians who lived in the area 8,000 years ago, the various wars and land deals that led to the establishment of Knoxville and the State of Tennessee,the impact of the railroad, and perhaps most importantly to the music scene, the presence of African Americans and their impact on the cultural landscape of the city. Also of interestis the discussion of the technological developments that were blossoming in Knoxville at the time of the sessions, most significantly the launch of one of the first radio stations in America, WNOX. The essay concludes by describing the decline of Knoxville leading into the Depression, and how it was saved by Roosevelt’s efforts to create the Tennessee Valley Authority in 1933 – all of this creating a vivid picture of what life and music must have been like at the time of the Knoxville Sessions. Next the authors describe in detail the
ways in which Vocalion Records came to choose Knoxville as a location to record, and how

their partnership with a local furniture chain influenced how the records were made and distributed. Several colorful characters are profiled here, including Voynow, who was also a top-notch professional jazz pianist, and producer Bill Brown, a goofball voice actor for many of the popular skits of the 1920s by the Skillet Lickers, Charlie Bowman and His Brothers, Alex Hood, Seven-Foot Dilly, and others.

The next section of the book is 75 pages of artist biographies (which often include information about the songs/tunes), presented in the order in which they were recorded. For those who are interested in learning about the lives of the musicians and the circumstances under which they came to record, this is the heart of the book. A nice addition is the inclusion of biographies and notes about the artists who recorded in Knoxville but whose recordings, for whatever reason, were shelved by Vocalion – Uncle Dave Macon, Jack Reedy, and Elmer Bird (all powerhouse performers at the time)
are among them. Of particular interest is the fact that most artists were from East Tennessee, which is surprising given Knoxville’s close proximity to several state borders. Olson and Russell personally interviewed surviving family members and gleaned information from fieldwork done by Bradley Reeves and others. The result is a well- researched and vivid portrayal of the cast of musicians who made up the Knoxville Sessions that feels personal and accessible – these notes strike a friendly and artistic tone, while being deeply informative.

An important distinguishing feature of this collection is its sound quality. Bear Family went to great lengths to obtain the best copies of 78s for use here (in some cases they used the only copy in existence), and through mastering and selective noise reduction, they have reproduced the sound in rich and dynamic detail. I have never experienced music from the 1920s that sounds this good. Reviewed by Roy Andrade