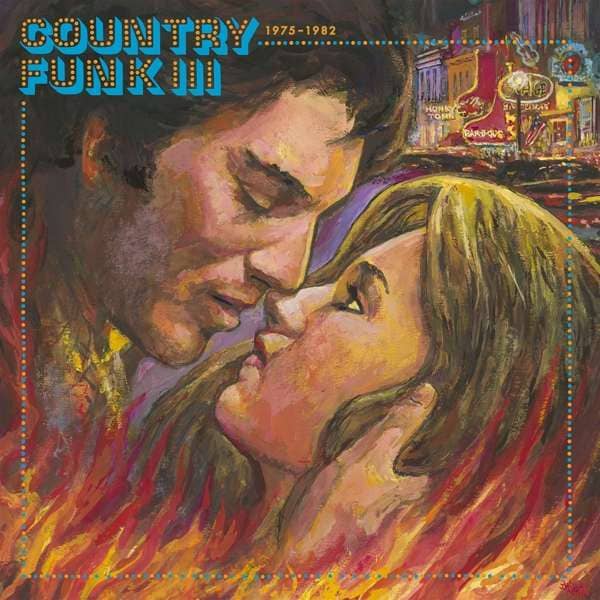 (Light In The Attic) 17 tracks, digisleeve

It's a genre that didn't emerge from geography or common ideology, but a term that is applied retrospectively and is based exclusively on the feeling of the songs: hip-swinging rhythms with bourbon in breath.
Third part of the highly acclaimed Country Funk series! - Featuring Dolly Parton, J.J. Cale, Conway Twitty, Larry Jon Wilson and Billy Swan, among many others - Includes a previously unreleased track by Tony Joe White - All tracks remastered - New original artwork by renowned artist J. William Myers (responsible for Robert Altman's "Nashville", Waylon Jennings and Willie Nelson's "Waylon & Willie" album and the LP covers for the Charlie Daniels Band).

In the summer of 2012, a new sound blew in from the dusty desert. It was a sound that was elusive, difficult to codify; a sound that eluded grasp like a wild horse. But this was no trend, no flash in the pan, no blending of styles. This sound stretched back decades, to the second half of the 1960s and early 1970s, when adventurous artists began to blend country harmonies with the high of gospel, the sexual thrust of the blues and a touch of big city hardness. This was a new sound with a simple name: Country Funk. Country Funk 1969-1975, first released in 2012, brought together a disparate group of artists united by the simple feel of their songs. Country Funk is by turns playful and melancholy, slow jammin' and booty-shakin'. It's a sound that carries through both in the studio and in the bar, as the artists represented on Volume I prove: Johnny Adams, Mac Davis, Dale Hawkins, Tony Joe White, Bobbie Gentry, Larry Jon Wilson, and many others. Just two years later, Volume I continued with a new collection of songs for Country Funk 1967-1974 (LITA 116, 2014). Volume II didn't let up, offering all the loose talking and lap-steel twangin' you could handle. Heavyweights like Willie Nelson, Townes Van Zandt, Kenny Rogers, Dolly Parton and J.J. Cale shared the bar stools with the lesser-known voices of Bill Wilson, Donnie Fritts and Thomas Jefferson Kaye. With Country Funk Volume III 1975-1982, even more funk is pulled out of the boot. This time the jeans are tighter, the hair bigger and the disco ball spins to a country synth beat. Produced and compiled by Jason Morgan (Bay Area DJ/collector) and Patrick McCarthy (co-producer/compiler of Volumes I & II), the tracklist features regulars Dolly Parton, J.J. Cale, Larry Jon Wilson and Tony Joe White (whose track is released here for the first time) as well as new faces like Steven Soles, Gary & Sandy, Conway Twitty, Travis Wammack, Billy Swan, Rob Galbraith, Brian Hyland and many more. As the 1970s faded and the 1980s approached, the palette of country funk expanded to include disco beats, heavy Moog synth bass and clavinet. Volume III features artists who continue to push back against traditional country tropes and productions while embracing modern soul, disco and messed up 80s synth pop. This is the true soundtrack of the urban cowboy. Saddle up, partner.