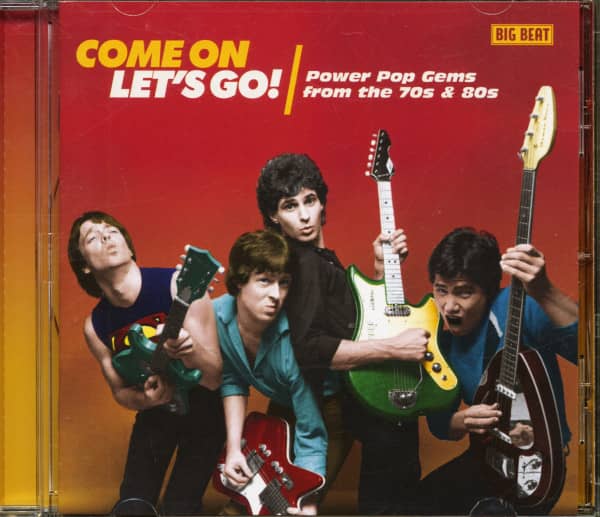 Nothing shatters the atmosphere as much as a lively guitar pop song delivered with a powerful beat, boundless energy and cheerful enthusiasm.

"Power pop is what we play," Pete Townshend explained in a 1967 interview to promote the Who's'Pictures Of Lily. Although the term power pop did not gain much importance at that time, it reappeared in the early 70s after the Beatles had disbanded and the music began to disintegrate into different camps.

In the USA, bands that remained true to the Beatles tradition were referred to as power pop. The raspberries got the ball rolling in 1972, and young bands were formed who actually only wanted to sing about girls and had a good time on Saturday evening. Throughout the '70s, the new wave had an ever-increasing influence on the movement, and even the Ramones put on thin ties long enough to support the Paley Brothers harmony pop masters on an exciting update of Ritchie Valens''Come On Let's Go'.

The power pop movement has never really established itself in the UK, especially because the very influential mainstream music press was first focused on progressive rock and then completely consumed by the arrival of punk. Even the mighty raspberries could not crack the UK Top 50, while Cheap Trick scored a low entry and only the crack managed to reach the Top 10. US fans were lucky enough to have publications like Creem, Hosenpresse and Who Put The Bomp, which were occupied by motherless writers with different voices. Greg and Suzy Shaw especially supported groups like the Flamin' Groovies, Rubinoos and Dwight Twilley Band, not only with their magazine, but once their Bomp! record label was also founded with singles from romantics, Shoes, 20/20, Gary Charlson and others.

Pure pop bliss is offered by the Toms on their richly melodic 'Better Than Anyone Else', while the Dwight Twilley band 'Looking For The Magic' takes to the stage with breathless energy and persistent determination. The romantics storm 'What I Like About You' - his hectic rhythm guitar, squeaky harmonica and raw Beatles-like vitality make him an absolute killer. Staten Island's Dirty Looks deliver their paean to Rock'n'Roll,'Let Go', with the same energy and drive that any punk band would have been proud of, while the Tweeds record our musical addiction in an 'I Need That Record'. Also included is the original US version of "Shake Some Action" by Flamin' Groovies, which Cyril Jordan claims is the best recording ever, and we're not arguing.

"Come On Let's Go! presents us with a collection of power pop classics, ambiguities and Linksfeld gems - collective proof that nothing shakes so much action as a lively guitar pop song delivered with a powerful beat, boundless energy and joyful enthusiasm.