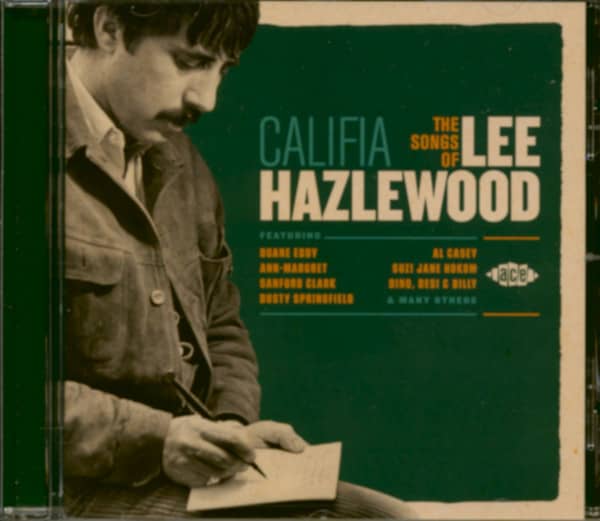 This is the latest addition to our high profile Songwriter series. Comprising familiar Lee Hazlewood fan favourites and scarcer titles in equal measure, the set spans Sanford Clark’s Top 10 hit of 1956 ‘The Fool’ (built on a memorable contribution from guitar wizard Al Casey) to 1970’s German language interpretation of ‘And I Loved You Then’ by transcontinental pop princess Peggy March (a song familiar to buffs via Lee's recording on his “13” LP).

No such compilation would be complete without Nancy Sinatra and axe-meisters Duane Eddy and Al Casey, with each of whom Lee was inextricably linked. They’re all here. Hazlewood mavens should lap up the titles by the Darlenes, the Hondas, Rose & the Heavenly Tones (produced by Sly Stone, no less) and Lee’s frequent collaborator Suzi Jane Hokom (who gets two collectable cuts, including a duet with him), each of which is new to CD.

One of pop’s genuine originals, Hazlewood is lionised by luminaries such as Primal Scream, Beck, the Jesus & Mary Chain, Pulp, Lydia Lunch and Sonic Youth. In 1999 he performed at the Nick Cave-curated Meltdown Festival on London’s South Bank backed by members of the High Llamas and Stereolab, while the “Total Lee!” tribute album of 2002 had the indie cognoscenti tripping over each other to record his compositions.

He was also a pioneer in the mysterious art of record production and taught a thing or two to the teenaged Phil Spector, who hung around paying close attention while Hazlewood crafted magnificently cavernous guitar instrumentals for Duane Eddy. Of the 25 tracks on “Califia”, Lee wrote each one and produced all but four.

As a performer, Hazlewood possessed an instantly recognisable bass drawl perfectly suited to his lyrical tales of low-rent heartache, self-deprecating comedy, picturesque nostalgia and mystical cowboy psychedelia. He sings on four cuts on this collection, including the folksy Shacklefords’ recording of ‘The City Never Sleeps At Night’, a song written specifically for Nancy Sinatra.

As Dionne Warwick was to Burt Bacharach and Petula Clark to Tony Hatch, Nancy was Lee’s perfect muse. Theirs was a partnership created one velvet morning in pop heaven. The expansively orchestrated opening duet ‘Lady Bird’ – just one of the many masterpieces they made together – was personally selected for this compilation by the lady herself.

A companion volume of Lee Hazlewood-penned instrumentals is also in the Ace pipeline, so watch this space. Meanwhile, check out the others in our Songwriter series, which include compilations based on the works of Randy Newman, Jackie DeShannon, Neil Diamond, Goffin & King, Bo Diddley, Burt Bacharach and many more.