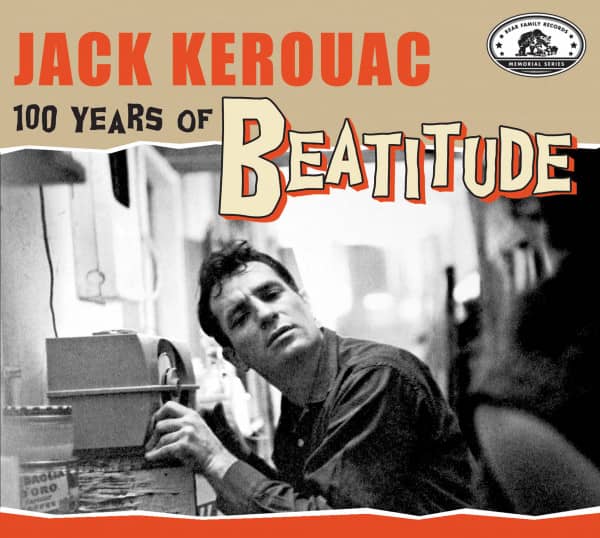 2-CD (digisleeve) with 36-page booklet, 52 single tracks. Total playing time approx. 150 minutes.
Jack Kerouac
On March 12, 2022, Jack Kerouac would have celebrated his 100th birthday, reason enough to remember him and his companions with a unique compilation! Kerouac is, together with Allen Ginsberg and William S. Burroughs the nucleus of the Beat Generation, the Beatniks, who from the late 1940s, across the Fifties, until the mid-Sixties acted mainly in California. Their type of pop literature was revolutionary at the time, like rock'n'roll in music. This compilation offers a great selection of unique recordings on this double CD.
The Beat Generation
A lot of rare recordings, some for the first time on CD! Including both sides of an MGM single, which was released for the movie 'High School Confidential', in which among others Jerry Lee Lewis participated. The title song of the film 'The Beat Generation' by Louis Armstrong is here, as is the version by Mamie Van Doren not used in the film. With artists such as Chet Baker, Ken Nordine, Dizzy Gillespie, Kenny Clarke, Slim Gaillard and Charlie Parker, beatnik jazz is well represented, while Perry Como, Edd Byrnes, Barbara Evans and others cover the pop/easy listening area. With Louis Nye, drummer Jimmy Van Eaton, Patsy Raye & The Beatniks and others, the dose of rock'n'roll is also guaranteed.
That the Beatnik wave also reached Europe which is proven by the British recordings of John Barry and Adam Faith for the film 'Beat Girl'. However, the music industry of the time tried to make fun of the Beat Generation with countless novelty recordings. With Bob McFadden & Dor, Johnny Beeman, Joe Hall & The Corvettes and others, we have integrated the best recordings. Bridging the gap between be bop/beatnik jazz to rock 'n' roll is rhythm & blues by Big Jay McNeely, Paul Gayten, Babs Gonzales and others. There are also examples of beatnick poetry on historic audio documents, such as readings by Jack Kerouac and Allen Ginsberg, TV recordings by Carl Sandburg, Ben Hecht and Kerouac, and the combination of poetry and music, 'word jazz', such as by Don Morrow, Ken Nordine, Shel Silverstein, Lenny Bruce and Jack Kerouac with Steve Allen on piano!

The 2-CD digisleeve includes a 36-page color booklet with many rare photos and nostalgic illustrations, as well as an accompanying text written by Roland Heinrich Rumtreiber!

This is great stuff! Thanks for this release as not only Kerouac deserves it, we deserve it too. Great soundtrack to Jack's writing!

some nice artefacts , but more to discover