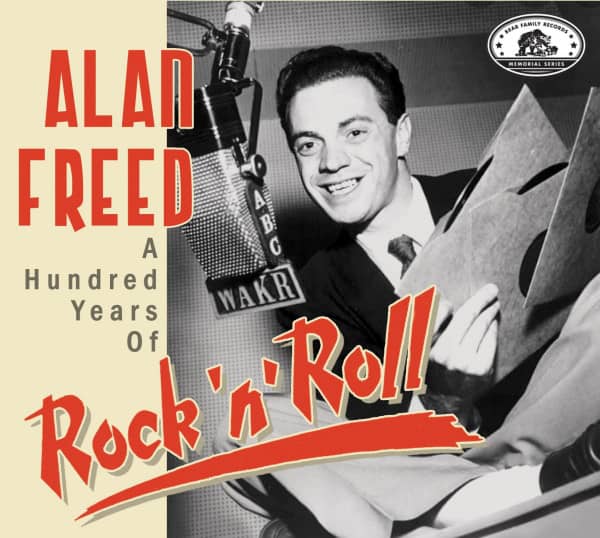 1-CD Digipak with 36-page booklet, 39 tracks. Total playing time approx. 79 min.
Rock and Roll
Alan Freed was THE top radio D.J. in 1950s America. Not because he is - incorrectly – considered to be the inventor of the term 'rock and roll' (African-Americans had been using that moniker since the 1930s), but because he took advantage of the rising popularity of R&B and white rock 'n' roll to put on R&B originals, which he then called rock and roll. He came up with all sorts of gimmicks for his radio shows and enthralled a teenage generation from Mexico to Canada. Hollywood took advantage of his immense popularity and gave him roles in music movies, and he got his own TV show. With this album we chronicle the most important years of his life, from his rapid rise to his sad decline in connection with the 'Payola' affair.
100 years of Alan Freed
Even if some titles on this CD are well known, like Bo Diddley or Chuck Berry's Oh Baby Doll - but where else do you get to hear these titles with announcements from the first legendary dee-jay in music history?  One or two songs may be available on YouTube, but the audio quality of our production is unbeatable. What made Alan Freed so popular? What made him the prototype of the radio DJ? Our CD production answers these questions twice.
Alan Freed's story is told both musically and lyrically on 36 pages in the full-color accompanying booklet with many rare illustrations.
No, he did not invent the genre term 'Rock and Roll'. But Alan Freed did use the phrase in his early 'Moondog' radio shows in Cleveland, Ohio. Later in New York, his 'Rock and Roll Dance Party' shows became legendary, especially as he took them from the radio to the stage as well, putting on huge live concerts from which the bonus live tracks were taken.
Alan Freed dedicated his life to rock 'n' roll, shaking the barriers of segregation by helping African-American music gain popularity with white audiences as well. Segregation did not exist at his live concerts. Eventually, Alan Freed failed. His involvement in the great radio corruption scandal of the late 1950s was only one of the reasons. As Bill Dahl concludes in his accompanying text, "Alan Freed was rock and roll's best friend." With this CD edition we would like to commemorate the great Alan Freed, who would have celebrated his 100th birthday on December 15, 2021.

I always enjoy hearing air-checks of Alan Freed. There are plenty here. There are commercials where Alan reads copy for local businesses in New York and dubious medical products. Honestly, I had never before heard Alan offer his apology for the overcrowding and disturbance at his early concert in Cleveland, Ohio. When Alan Freed starting playing rock 'n' roll on radio there weren't very many rock 'n' roll records. It was all so new. He played a far amount of jazz orchestras playing frenzied dance numbers some of which you will hear on this CD. This is a great historical document of Alan Freed's contributions to music and radio broadcasting.