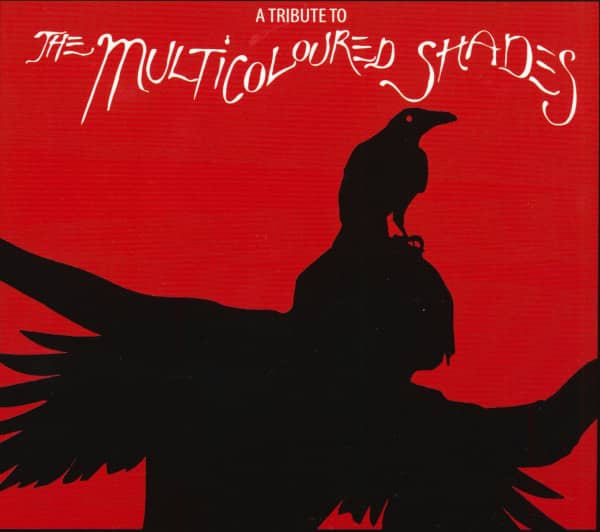 Various: A Tribute To The Multicoloured Shades (CD)

Micha Döring, bassman of The Muliticoloured Shades, has found out over the last few years that there are indeed several bands that play cover versions of the Multicoloured Shades live or have even recorded them for sound carriers.
So the neo-psychedelic band from the Ruhr area doesn't have to have been completely without influence on their fellow musicians. In their heyday they not only made it across the Republic to Austria and Switzerland but even across the Channel to Great Britain, where their powerful dusty garage sound made big waves! Especially the meanwhile deceased frontman and singer of the band, Pete Barany, met with great media interest.
But even today, about 35 years after the active phase of the Shades, the pops rotate in the relevant underground discos or appear in the playlists of many radio stations. So what could be more obvious for Micha Döring than to launch a call: Who wants to reinterpret songs of the Multicoloured Shades?
And you felt like it!
Cult colleagues like Mike Zero, Tex Napalm and Hank Ray are there, as well as solid bands like Farm 136, Nona Split, Sunset an Mars, EKG, Seven Days Awake, The Grey Lodge, The Bad Bastards, Banta, The Rather and Zepp Oberpichler.
They all took titles of the shades from all periods of the band's history and interpret them independently with love for detail: powerful, rocky, electronic, dark and melancholic! Everything included! An extraordinarily good compilation!

Article properties: Various: A Tribute To The Multicoloured Shades (CD)