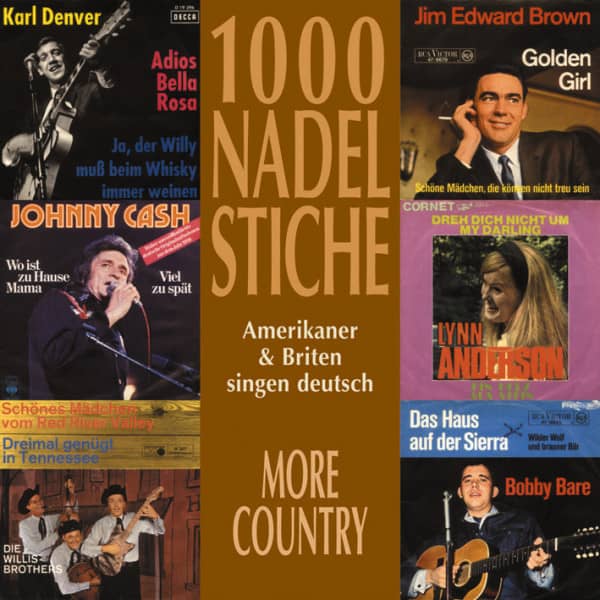 
The complete range of songs from the book '1000 Nadelstiche' includes many hundreds of titles - interpreted by established mega stars and nobodies who have never been able to assert themselves nationally or internationally. The repertoire includes compositions whose original versions have been chart hits, as well as commissioned compositions without an English original. And from this wealth of material there are works in all conceivable stylistic directions: Beat, Pop, Twist, Surf, Hully Gully, Soul, Folk, Rock'n'Roll, Country - the list is endless.

In order to channel all this clearly, we had begun with sequence 2 to make sortings. The current episode 7 rounds off the extensive range of semi-trailer tractors - if new arrivals do not appear surprisingly in retrospect.

Thus finds its conclusion what had begun on the unanimous episode 1 with Who knows the way and was continued on episode 2 with two further titles. The songs In Virginia, Much Too Late and Where Is Home, Mama Now End the Chapter Johnny Cash, who with a total of six German-language songs ranks among the major providers of the Country & Western scene. Just like the Anita Kerr Singers: this ensemble, which, in addition to its own recordings, is also repeatedly engaged by colleagues for the vocal backroom, is now even represented in the CD series '1000 Needlesticks' with eight songs in German. Unusual: Between the release of their third single I'm Happy Baby and the expected final point Schön ist der Morgen / Morgen ist es schon zu spät lagen volle zehn Jahre Pause (1965/1975) - an interruption that didn't harm the vocal potency of the formation.

Also the fans of Jody Miller are supplied: After Was für ein Tag / Liebelei hat keinen Sinn (contained on episode 2) both sides of their second single in German language, Sei mein Mann und Jetzt geh'n uns're Sterne auf, complete the Miller catalogue. Even busy professional writers like Jean Nicolas (= Camillo Felgen) and Joachim Relin could not prevent that this publication was not a great success. The original of the A-side, Be My Man, had already been found in the USA neither in the pop nor in the country charts. Behind the composer pseudonym of the B-side (Bert Olden) was the Cologne-based EMI producer Otto Demler, who had also worked as a 'language assistant' on German recordings of the Beatles and Wanda Jackson in the mid-sixties.

Country star Bobby Bare is represented with four titles on this coupling. You won't find any original US versions of his six songs in German, they are all new creations made especially for the man from Ohio. With Fini Busch, Kurt Hertha, Hans Bradtke, Günter Loose and Kurt Feltz the cream of the local lyricists had been engaged for these songs, which all date from 1965 - a year in which Bare (after previous successes) was no longer represented in the US pop charts. The obvious attempt to use the German market as a secondary venue instead brought only a partial success: Only everyone believes that I am happy and made the leap into our hit lists (highest ranking: 26th).

The following year Jim Ed Brown was chosen by the RCA to address the German fans directly in their native tongue strike (all conceived by Kurt Feltz). Both singles, Golden Girl (Blonde Dreams) / Beautiful Girls who can't be faithful and Mikey / Renate and Karin, are about 35 years after their appearance hard to find. For the country star from Sparkman, Arkansas, these four songs were only limited premieres in another language. Brown had already tried a German-English mix on a previous single, I Heard From A Memory Last Night. In July 1965 the original had climbed to position 33 of the American Billboard Country Charts.

Who thought so far, with I Remember You and So leicht leernt man das Jodeln the two only songs of Frank Ifield in German language to own, is wrong. The Englishman from Coventry, who later moved to Australia, had recorded two more titles, which were not thrown onto the market by his record company. Within the framework of the research, these recordings from July 1963 could be located on one volume. You belong to me all alone and The Old Cowboy come to light for the first time on this CD.

Lynn Anderson from North Dakota presented herself to the audience with four German-language songs only towards the end of the sixties, but still before her international top hit Rose Garden. After I have a boy in Germany and tomorrow you will be with me again (both to be found on '1000 Nadelstiche', episode 2) now also celebrate Ein Herz aus Stein und Turn dich nicht um um, my Darling CD premiere. Two of these four numbers were later released again on vinyl singles: When Rose Garden had grown to a direct hit, both B-sides of the German 45's appeared as a new song pair on Cornet/BASF in 1971, perhaps to animate new buyers in the wake of the hit - first under the catalogue number CQA 406, but which was changed to CQA 439 by a sticker.

Six performers have not yet been represented in the 'Nadelstiche' series. After Frank Ifield, there would be another British native: Karl Denver (real name: Angus McKenzie). The Scot from Glasgow, who died in 1998, had been able to land a dozen hits in the UK charts with his trio. However, his 1963 excursion into German had no lasting effect: Adios Bella Rosa and Ja, Der Willy muss bei Whisky immer weinen did not place themselves.

The American Bill Hayes was known since the early fifties as a television and film actor in the USA. His ambitions as a singer led to a super hit: The Ballad Of Davy Crockett (from the Disney TV series 'Davy Crockett') was number 1 in the States in 1955 and number 2 in Great Britain. The Germanized version The Ballad of Davy Crockett (besides the vinyl version even a shellac version) and its back Leb' wohl, my home are now available for the first time on Compact Disc. Three years later, the Hayes single Das ist Musik appeared on the Cadence label in the USA - but here Hayes only sang the title line in German.

His fellow countrymen The Willis Brothers were represented four times in the US country charts in the sixties. The brothers James, Charles and Richard Willis had already taken part in radio broadcasts in 1932 (!) under the name Oklahoma Wranglers. Their only German-language single from 1964, Schönes Mädchen vom Red River Valley / Dreimal genügt in Tennessee, is today one of the most sought-after vinyl editions of the three old masters, of whom James (1981) and Charles (1976) have already died.

Ken Curtis, born 1916 as Curtis Gates in Lamar/Colorado, is also no longer alive. In the USA rather known as a member of the legendary Sons Of The Pioneers, he was a crowd favourite in Germany: At the beginning of the sixties as Jim Buckley in 'Sprung aus der Wolken' (original title: 'Ripcord') and afterwards especially as a quirky deputy sheriff named Festus Haggen in 'Rauchende Colts' (original: 'Gunsmoke'). Curtis was only heard in German in 1979.

Walk On By was the name of the biggest US hit by Leroy van Dyke (# 5, November 1961), who had been in the American billboard charts five years earlier with The Auctioneer (# 29). In April 1962, a German version of his top 10 goal was recorded in the country Mecca of Nashville: Don't pass.  Van Dyke's version on the Mercury label could not hold its own with us, but the recording of Schlager star Rex Gildo on Columbia, on the other hand, reached 14th place in the hit parade. Possibly (also) the consequence of a not very convincing release policy on the part of the record company: Leroy van Dyke had to share the place of his single with a title of his colleague Joe Dowell, without an attractive picture cover was renounced.

Mary Frances Penick (born on 30.12.1931 in Dry Ridge, Kentucky) is one of the greats of the American country scene. However, she became known under her pseudonym Skeeter Davis. German lyrics in their songs were not known until now. We owe the title G.I. Johnny to the tip of the Berlin collector Peter Schlinke. It was immortalized on a rare acetate in mixed languages and is offered here for the first time worldwide. This find, and we ask for your indulgence, unfortunately does not meet the usual high Bear Family standard. In spite of existing, uncorrectable synchronisation problems, we have decided to release it in order not to deprive all fans of this rarity. 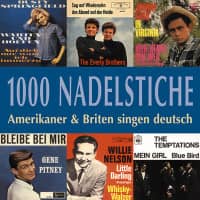