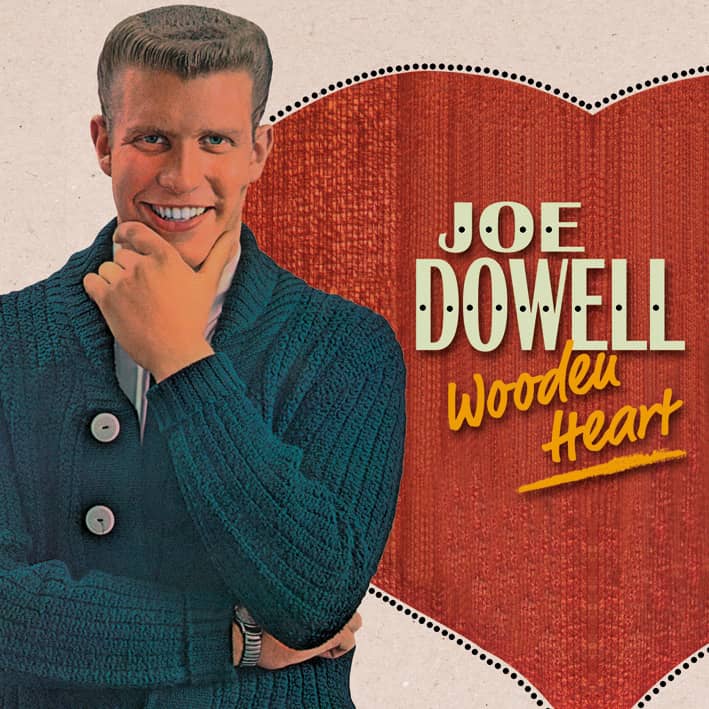 Joseph Harry “Joe” Dowell, born January 23, 1940, best-known for his number one chart success, Wooden Heart, passed away February 4, 2016 in Bloomington, Illinois after suffering a heart attack in the prior weekend.

At his first recording session, he sang the tune Wooden Heart, which had been a hit for Elvis Presley in Europe, but which was never released as a single stateside. Wooden Heart became the first single released on Smash Records to shoot to #1 on the Billboard Hot 100in 1961. It sold over one million copies, and was awarded a gold disc.

Bear Family Records released a CD on Joe Dowell's music, including the hits and unreleased recordings.

"I'm not so proud of this, that I did a little bragging," Joe Dowell recalls. As a 21-year-old student from the University of Illinois in Champaign with a little time to spare during final exams, he and a friend, John Coleman, drove to Nashville, Tennessee in a borrowed Volkswagen. They visited every record label and publishing house on Music Row as Dowell tried to raise interest in his songs and singing ability. He told the music biz skeptics, "I know my first record is going to go to #1. I just feel it! I know it will!"  Dowell later heard from Red Sovine that he became the butt of jokes up and down Music Row, this unknown kid full of braggadocio. But when his debut single, Wooden Heart, sailed to the top of the charts a few months later, "All the backstabbing stopped on Music Row," Dowell says. "They didn't say anything more."

Wooden Heart  was one of the biggest hits of 1961 and the beginning of Dowell's two-year stint at Smash, a then-new subsidiary of Mercury Records. Dowell's Smash recordings encompassed a variety of styles—rock 'n' roll, teen idol pop, traditional pop—as Dowell struggled to assert himself as a serious vocalist and songwriter while his label made him cut a series of teen-oriented novelties. Dowell likened the artistic process at Smash to an assembly line, but his tenure with the label yielded several chart hits, two albums, and some fun novelty music he performed well even when it was not to his liking.

Joseph Harry Dowell was born January 23, 1940 in Bloomington, Indiana, a small college town an hour's drive south of Indianapolis. His father, Harry Francis Dowell, taught high school physics and French, led the high school orchestra, and coached basketball and swimming. While teaching in Terre Haute, Indiana, he married one of his former students, Ruth Reupke. Dissatisfied with his low pay, Harry became involved with the Boy Scouts and moved to Bloomington, Indiana to work as an assistant Scout executive. Joe was born there and his family—father, mother, and older sister Joann—lived in a tidy house on Union Street.

Harry was offered a position as head Scout executive in 1941 that required the Dowells to relocate to another Bloomington--Bloomington, Illinois, 130 miles southwest of Chicago. Ruth took a job at Haywood High School where she taught English and Latin and served as the school's librarian and play director, a job she held for 22 years.

Joe's older sister Joann died of encephalitis from a tick bite in 1943 at the age of 7, and in 1950 tragedy struck again when Joe's 47-year-old father died of a heart attack. His mother was left to support Joe and his younger sister Susie while trying to deal with the blow of losing half her family. At thirteen Joe picked up the guitar and began writing songs as a way of working through his feelings of loss.

"I wrote my first song, the lyrics of which are pretty telling," Joe remembers. "I felt as if I were being abandoned by the world. There was a lot of anguish. And the first song lyric I ever wrote with a guitar was 'Tell me why you don't love me anymore.' Obviously expressing a sense of sorrow and loneliness, because it was not written to a girl or to a broken boy-girl relationship. It was a statement of psychology to the world in general: Tell me why I'm unloved."

Within his family, Dowell says, "Mother was dealing with her own emotions and could not be expected to be phenomenal child psychologist, God, teacher, homemaker, cook, and all that. So she really did not know what I was going through."