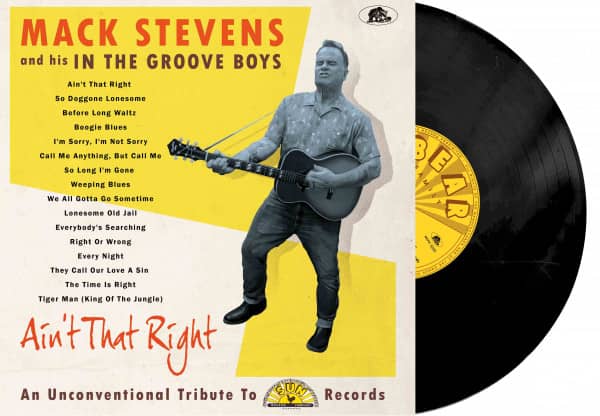 Mack Stevens And His In The Groove Boys: Ain't That Right - An Unconventional Tribute To Sun Records (LP)

​1-LP (12inch) 140-gram vinyl, black, 16 tracks. Total playing time approx. 41 min.
If you trust the rare published resumes, Mack Stevens was born in the mid-fifties in Corsicana, southeast of Dallas, Texas. His musical love is for original rockabilly, as it was produced at that time when he came into the world, especially in Memphis by Sam Phillips for his Sun Records label in his Sun studio.
It took a while to Mack Steven's first own release. In 1993, his debut album came out on Germany’s Eagle Records. Singles, LPs, CDs and even 78s followed for labels in France, Japan and, among others, the USA, where he was able to impress legendary rockabilly producer Ronny Weiser. Ronny released four CDs in the following three years on his Rollin' Rock label. Mack went on to record for Scana, Part, On The Hill, Hog Maw and his own Freedonia label.
Mack Stevens has now recorded more than 500 songs, either rockabilly, hillbilly country or trashy blues. He enthusiastically collects original rockabilly records and had his own radio show, 'In The Groove'. Mack is and remains a purist. A flat note here and there or a playing mistake doesn't bother him. But he doesn't like it when guitarists think the rockabilly school started with the Stray Cats.

Mack has been married to an Argentinean since 1998. Since then, he's been shuttling between the U.S. and South America, where these brutally good recordings were made for his homage to the 1950s 'Sun' Sound.

Now, one might expect another soft-spoken and trivial album of cover versions of the great Sun hits - but not with Mack at the helm! He knows his way around the Sun Records catalog and has chosen some of the wildest and most obscure numbers for this album and his tough, often brutal and utterly emotional rehashing of the Sun story. It's wild, it packs a punch, yet exudes the charm of the originals with Mack Stevens' signature approach.
Wild, authentic - pure dramatic rockabilly with trashy blues touches!

Article properties:Mack Stevens And His In The Groove Boys: Ain't That Right - An Unconventional Tribute To Sun Records (LP)

Write an evaluation
Evaluations will be activated after verification.
Weitere Artikel von Mack Stevens And His In The Groove Boys
Mack Stevens: My Baby Walked Off - Mitad De Un... 7inch,... Art-Nr.: DUR45002

$28.24
Ain't That Right - An Unconventional Tribute To Sun Records (LP) 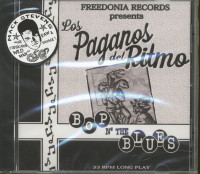 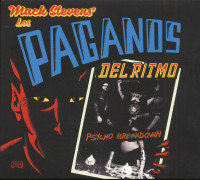 Tracklist
Stevens, Mack - Ain't That Right - An Unconventional Tribute To Sun Records (LP) LP 1
01 Ain't That Right
02 So Doggone Lonesome
03 Before Long Waltz
04 Boogie Blues
05 I'm Sorry I'm Not Sorry
06 Call Me Anything, But Call Me
07 So Long I'm Gone
08 Weeping Blues
09 We All Gotta Go Sometime
10 Lonesome Old Jail
11 Everybody's Searching
12 Right Or Wrong
13 Every Night
14 They Call Our Love A Sin
15 The Time Is Right
16 Tiger Man (King Of The Jungle)