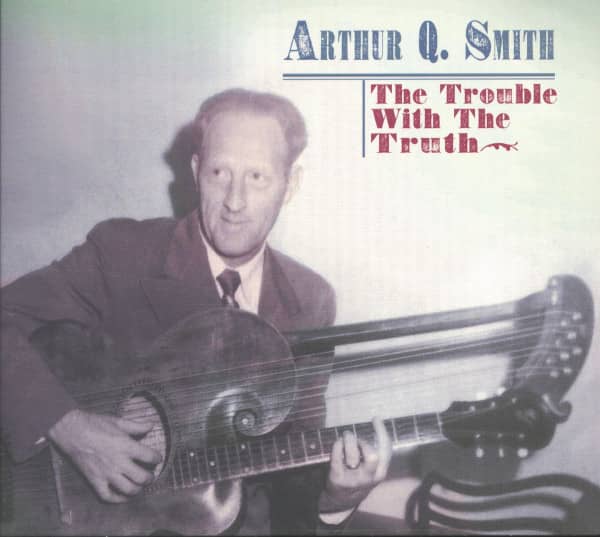 Arthur Q. Smith: The Trouble With The Truth (2-CD)

The Grammy Award nominations were announced this morning, and "The Trouble With The Truth" (BCD 17426 by Arthur Q. Smith) received a nomination in the 'Best Album Notes' category

· Rumors circulated for years about the songs that Arthur Q. Smith actually wrote. Now the story is revealed in a 124-page book by Knoxville researchers Bradley Reeves and Wayne Bledsoe.

· Includes every known recording, including song demo’s, by Arthur Q. Smith, plus MANY rare photos!

From the introduction by Marty Stuart:

The trouble with the truth, it always comes around. I grew up hearing some of the old timers tell their stories about songwriting and who wrote what. It was cold-blooded business. When the subject of writing then selling songs comes around, Arthur Q. Smith is legendary: I Overlooked an Orchid (While Searching for a Rose), Wedding Bells, Rainbow At Midnight, If Teardrops Were Pennies, I Wouldn’t Change You If I Could and Somehow Tonight are but a handful of the songs he penned and sold.

Everyone that knew Arthur willingly sold his songs. The saddest of all the facts is that some of his songs were bought for the price of whiskey money. To bring the case of Arthur Q. Smith front and center, to have the absolute truth be told as to which songs he actually wrote that bear others names, songs that are regarded as some of country music’s cornerstones, songs that are attached and credited to the legacies of several people who have been inducted into the Country Music and Songwriters Hall of Fame would most likely be seismic. Such a re-tooling of history would be a public relations, legal and accounting nightmare, not to mention the embarrassment that would undoubtedly be heaped upon families who inherited legacies left behind by loved ones from another time. Let me say this:

I hereby nominate Arthur Q. Smith to be inducted into the Songwriters Hall of Fame. It’s long overdue.

Review 4
Read, write and discuss reviews... more
Close menu
Customer evaluation for "The Trouble With The Truth (2-CD)"
From: Bernd Meyer On: 16 Dec 2017

Arthur Q. Smith - The Trouble With The Truth

The Grammy Award nominations were announced this morning, and "The Trouble With The Truth" (BCD 17426 by Arthur Q. Smith) received a nomination in the 'Best Album Notes' category

Write an evaluation
Evaluations will be activated after verification.
Press - Arthur Q. Smith - The Trouble With The Truth
Press - Arthur Q. Smith - The Trouble With The Truth - The Audiophile Man Well, he was new to me but Smith (or ‘Q’, as he was known to his friends) produced and sold hundreds of country songs in his time and many of them became hit songs. For who? How does Ernest Tubb, Hank Williams, Ricky Skaggs, Mickey Gilley, Carl Smith, Bill Monroe, Porter Wagoner and Dolly Parton grab you? And that’s not all of them!
26.12.2016
Similar products Customers also bought Customers also viewed
Similar products
Hank Williams: Lost Highway - Graphic Novel (Gebundene... Art-Nr.: 0023044