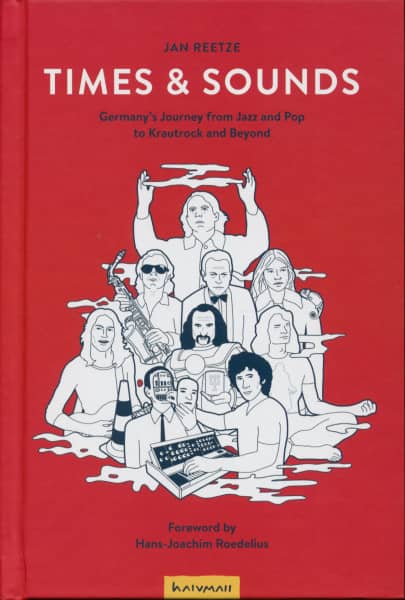 Jan Reetze: Times & Sounds - Germany's Journey from Jazz and Pop to Krautrock and Beyond

(Halvmall) English, Clothbound, 536 pages, b/w illustrations
This book is a journey – a ride through the depths of Germany’s modern musical roots: At the beginning of the 1970s, experimental and progressive music in Germany developed far from the mainstream. Although few initially noticed it, it is now internationally celebrated as a cult phenomenon called „Krautrock“.

Today, bands like Kraftwerk, Can, Amon Düül II, NEU!, Cluster, and Tangerine Dream are considered pioneers of groundbreaking sound experiments. In order to understand the Krautrock era and its impact, it’s worth delving deeper into the history of German rock music and taking a closer look at the overall picture.

Times & Sounds offers a comprehensive insight into the mechanisms of post-war Germany’s music industry and sheds light upon its diverse musical styles, as well as their mutual influences and connections, which have received little attention until now: From the onset of German Jazz and Swing orchestras to the first Rock ‚n‘ Roll bands around Hamburg‘s Star Club and electronic synthesizer pioneers. From the intact world of Schlager to agitprop and left-wing protest songs. From the avant-garde compositions of Stockhausen and his presumed disciples of Krautrock to the Neue Deutsche Welle.

This book is a journalistic diary tracing Germany’s dynamic culture from the late 40s to the early 90s. Those who take this journey experience the ups and downs of five decades, thus developing an understanding deeper than any other of the Krautrock phenomenon. "For experts, as well as newbies, in the krautrock field, this book does not only open up several new views for the first time, it presents a general overview of the big picture of rock music in Germany." Hans-Joachim Roedelius (Kluster/Cluster/Harmonia) „Finally, the whole story at a glance! Excellent!“ Hellmut Hattler (Kraan/Tab Two)

Article properties: Jan Reetze: Times & Sounds - Germany's Journey from Jazz and Pop to Krautrock and Beyond