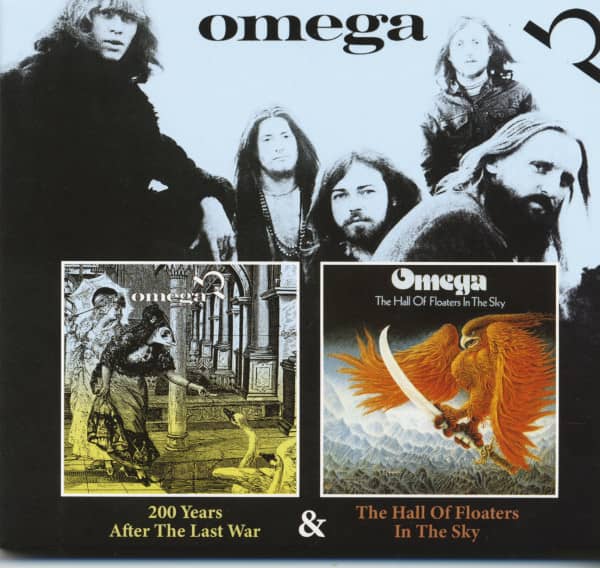 Two albums from the most creative period of the superstars from Hungary.

200 Years After The Last War was first recorded in Hungarian in 1972 and two years later in a heavily modified English language version.

For The Hall Of Floaters In The Sky from 1975, the band translated four songs from the Hungarian album Nem tudom a neved from the same year into English.

More than 50 million records sold, LP productions in Hungarian, German and English, tours and festival appearances all over Europe and Japan, at least 50 cover versions or rewrites of the world hit "Gyöngyhajú lány" exist - Omega are Hungary's number one rock export. In 2022, the band will celebrate its 60th stage anniversary, making it one of the longest-serving rock formations in the world. On St. Nicholas Day, December 06, 2021, singer and founding member Janos Kobor died of the corona virus. Now the Omega albums from the well-known and successful Bacillus period are re-released original and complete.

200 Years After The Last War was released in 1974 and has only the title song in common with the fabled censored and withdrawn Hungarian original 200 évvel az utolsó háború után, which figuratively tells of birth control in a totalitarian system. The almost 20-minute suite on the A-side, already released on OMEGA 5 in 1973, links various influences from which the Hungarians formed their own style at that time: blues, early Pink Floyd, Led Zeppelin and Deep Purple.

The Hall Of Floaters In The Sky (1975) presented itself with a similarly bizarre cover as 200 Years After The Last War and therefore also belongs to the extraordinary releases of the group. After three productions at Dierks Studios, this time they had moved to England's Chipping Norton Studios and returned with a sonic hybrid of Focus, Manfred Mann's Earth Band, Sparks and Cockney Rebel. The sound was drier than before, the guitars crisper, the keyboards more defining. The orchestral arrangements gave the whole album a touch of space rock.


Article properties: Omega: 200 Years After The Last War - The Hall Of Floaters In The Sky (2-CD)