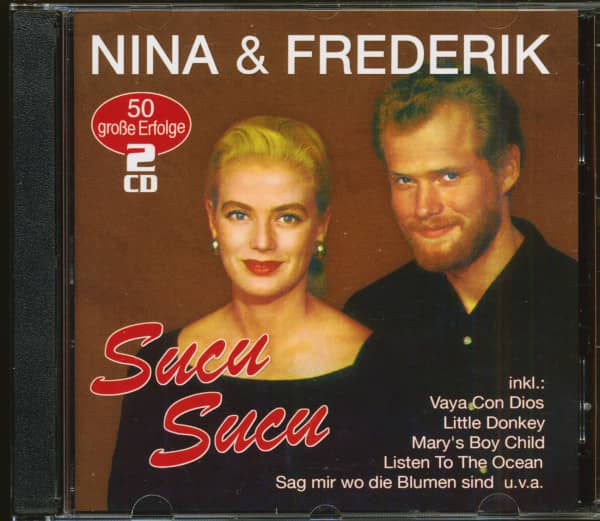 Nina & Frederik were a Danish-Dutch vocal duo that enjoyed great success worldwide from the end of the 50s to the beginning of the 60s. It consisted of the singer Nina van Pallandt, daughter of a newspaper publisher, and her husband Baron Frederik van Pallandt, son of the Dutch ambassador to Denmark. Both shared their preference for the calypso music so popular at the time.
Together as a duo they won a talent competition at Copenhagen's Tivoli and recorded their first album of Calypso titles, which reached the top ten in the UK. In 1959 "Mary's Boy Child" reached 26th place in the British charts. In the same year Nina & Frederik took part in the movie "Formula For Love" in which they appeared together with Louis Armstrong.
In Germany the duo was part of the movie "Mandolinen und Mondschein" whose title song was also released as a single. Further chart successes had Nina & Frederik in England with "Listen To The Ocean" (1960, #46), "Little Donkey" (1960, #3), "Long Time, Boy (1961,#43) and "Sucu-Sucu" (1961,#23).
A few more German hit singles and Christmas records followed until the duo ended their record career in 1963. In 1966 another live record was released. Until the end of 1969 Nina & Frederik continued to give concerts. This double CD contains a retrospective of their most important recordings in English, German and French!