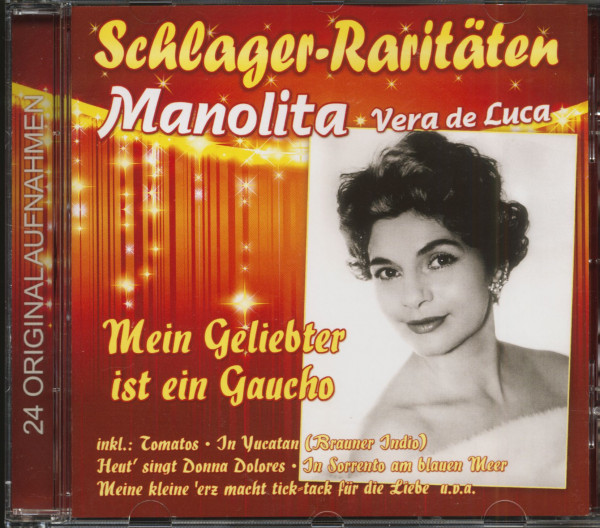 Vera de Luca was born on 7 December 1928. The Italian came from Abruzzo, the mountainous region south of Rome. She came to Germany in 1938. Shortly after the war she sang in Frankfurt am Main in the "Little Theater", a revue theatre for the American soldiers. There she came to an audition with Willy Berking at Hessischer Rundfunk. Already in 1950 she got her own episode of the HR series "Hörerlieblinge", in which she could present herself.
In the feature film "Queen of a Night" from 1951 Vera de Luca had a small film role. "My little 'erz makes tick-tack for love" was one of her first radio successes. Further recordings with the orchestras Adalbert Luczkowski and Pierre Blanchard followed. In the middle of the 50's followed the change to the orchestra of her discoverer Willy Berking with the production "Heut' singt Donna Dolores", which became her greatest charter success (February 1955, place 11). In 1957 Vera de Luca took on a new stage name - from then on she called herself Manolita. Two further hit parade successes followed with "Mein Geliebter ist ein Gaucho" (April 1957, 20th place) and "Tomatos" (May 1958, 15th place).
Vera de Luca was married to the German guitarist and painter René Slesina and had two children. In the 50s she lived in Bad Nauheim. She also performed with her husband, and he often accompanied her with the guitar. At the end of the 50s Manolita's record career ended.