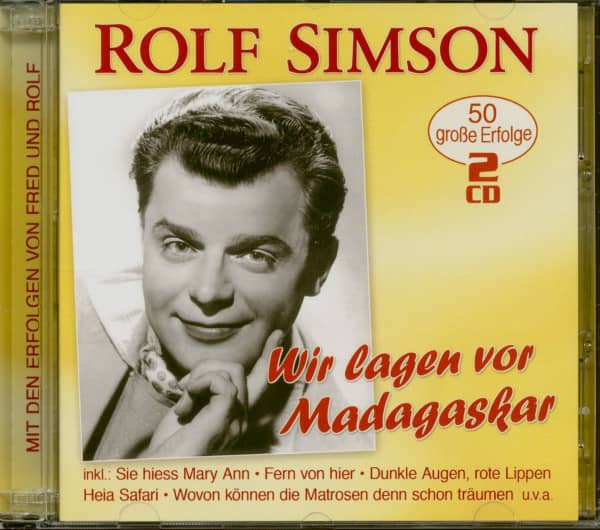 (MusicTales) 50 Tracks
Rolf Simson was born on 11.09.1924 in Ludwigshafen. As a boy he sang in the children's choir and got his first guitar at the age of 14. The war first interrupted his singing career. After the war he tinkled across the country and tried to earn his living as a singer. In Bremen Rolf Simson was engaged for recordings at Radio Bremen, he had to borrow the guitar. He took singing lessons and studied harmony.

For four years he sang in the Bremen Opera Choir. He joined the "Starlets" in October 1954 through various engagements with the "Hansen Quartet" and the Bayreuth Festival Choir. From 1956 Rolf Simson published his own records. Right in the first year he succeeded with "Dunkle Augen, Rote Lippen" the first charter success (1956, place 19).

From 1958-1961 he recorded several successful records together with Fred Weyrich as "Fred und Rolf". The most successful title "Wir lagen vor Madagaskar" reached 10th place in the German sales charts in 1961. He also appeared in other vocal groups such as "Die Benicarlos", "The Seven Walkers," "The Montana Boys," and "The Walking Companions." Until the 90s he worked as a producer in his home studio. Rolf Simson died on 29.04.2006 in Bremen.