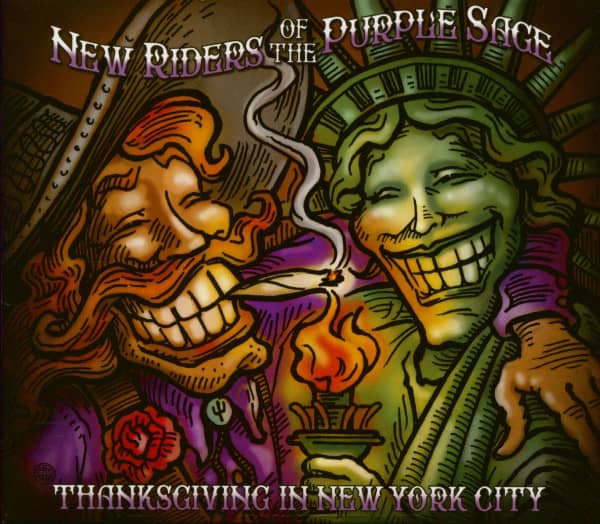 The New Riders of The Purple Sage were regarded as America's favorite psychedelic cowboy band in the early 1970s. What had started as a chance for the Grateful Dead's Jerry Garcia to learn pedal steel guitar as he accompanied singer John "Marmaduke" Dawson and his unique songbook of classic Americana tunes, had become it's own entity by 1972. With the addition of Buddy Cage on pedal steel to replace Garcia, 1972 saw two studio releases in the forms of Powerglide and Gypsy Cowboy. Emerging from the shadow of the Grateful Dead after opening countless shows for them, not only where the New Riders becoming a bona fide live act to contend with, but their performances were earning them a loyal and rabid following on the East Coast, especially in the New York Tri-State area.

Captured at the late show from November 23, 1972, at the Academy of Music, Thanksgiving In New York City features the band in the midst of an energetic and highly regarded tour. Along with Dawson classics like "Henry, " "Portland Woman, " and "Last Lonely Eagle, " lead guitarist David Nelson and bassist Dave Torbert also bring some Bluegrass ("She's No Angel") and R&B ("I Don't Need No Doctor, " "Willie And The Hand Jive") to the mix. An evening with New Riders of the Purple Sage in downtown Manhattan offered music fans a musical panorama that continually upped the ante of the potential of country meets rock with a psychedelic twist.

This concert from 1972 began what would be an annual engagement over the Thanksgiving holiday in New York City for the following three years. It was a family vibe of a whole other nature when the New Riders came to town. Crank it up and enjoy the musical feast that is Thanksgiving In New York City!

New Riders Of The Purple Sage

Nashville session man, studio owner, and producer Norbert Putnam had a loose affiliation with Columbia Records that saw him handle Dan Fogelberg's first record (see our previous volume) and then, bizarrely, NRPS. He went to the Bay Area to meet them, and it proved to be an epic cross-cultural collision. Picked up by a hippie driving a VW bus, he was taken out to the band's communal space. "It was up on the hill in the middle of a wheat field," Putman said later. "The women are walking around wearing muumuus and the kids are running around naked, and here I am, this clean-cut guy from Nashville walking into all this." Marmaduke Dawson took Putnam and the rest of the band out for a communal gathering in the wheat field. "The wheat is so high I can only see people's heads," he said. "I had this speech ready where I was gonna tell them it wasn't going to work. I put my hand up to make a gesture and a butterfly lands on it. The band sees this. They stare at it. No one says a word. Then Marmaduke says, 'That's an omen, man. You're our producer. You've been chosen.' I think to myself, 'You've gotta play the cards you're dealt.'" Putnam called it a good take if Spencer Dryden didn't drop his drumsticks, but they emerged from the Record Plant in nearby Sausalito after four weeks with NRPS's best-selling album, 'The Adventures Of Panama Red.'

Putnam aside, there was another Nashville connection in Peter Rowan. A former Bill Monroe sideman, Rowan had moved out west to become involved with Seatrain, Earth Opera, and other groups of the moment. He wrote the LP's title song as well as Lonesome L.A. Cowboy. In October '73, Rowan recorded this song live when he was with Old and in the Way alongside Jerry Garcia, Vassar Clements, David Grisman, and John Kahn. 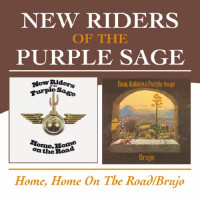