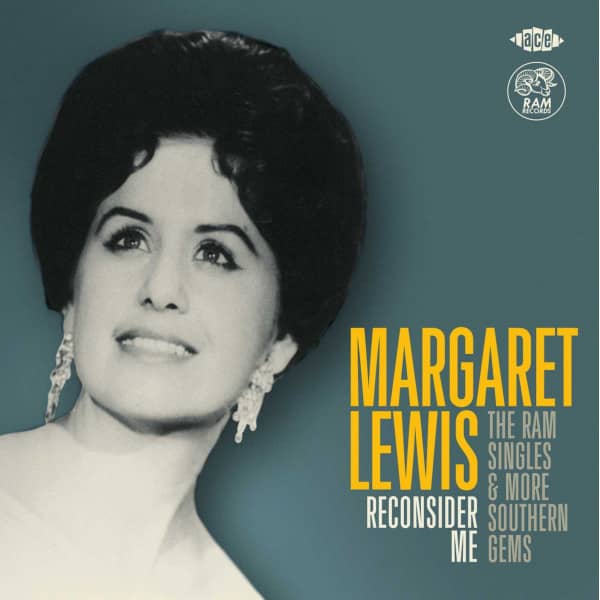 (Ace) 28 tracks.
Compiled by John Broven, assisted by Margaret’s husband Alton Warwick, this recompiled selection features 13 tracks new to Ace together with a memorabilia-laden booklet.
Margaret mixed her musical styles and this compilation, featuring all her RAM singles, live performances and previously unreleased material, runs the gamut from rock’n’roll to hillbilly and swamp pop, with a touch of gospel thrown in for good measure. She is accompanied by her friend and RAM label-owner Mira Smith, appearing under the sobriquet of Grace Tennessee.
Margaret Lewis was a superb talent who could rock like Wanda Jackson, be as wistful as Patti Page and then become as achingly soulful as Patsy Cline. Here we highlight the original RAM singles by this soulful Shreveport singer and songwriter. Includes 13 tracks new to Ace CD, many featuring the bluesy guitar of Grace Tennessee.

Following Margaret’s very sad passing on 29 March this year, we feel the time is right to revitalise her CD that has been a staple of the Ace catalogue for almost 25 years. Accordingly, we have produced in her memory a considerably revamped package from Mira Smith’s RAM label of Shreveport, Louisiana, with a new title, “Reconsider Me”. The original release, “Lonesome Bluebird”, now something of an American roots classic, was compiled and annotated by the late Ray Topping

So what is different? A lot. There are 13 new tracks out of 28, replacing 12 titles from the first CD, plus a greatly expanded booklet and complete remastering. Incidentally, most of the tape transfers were carried out by noted Stax Records engineer, the late Ronnie Capone. Now we can hear all six of Margaret’s RAM singles which were never widely available in the first place, between 1959-62, not even at latter-day record fairs. To retain the spirit of the “Lonesome Bluebird” CD, the original notes are replicated with modest edits and updates, but there is also much new information and photos provided by Margaret’s husband, Alton Warwick.

During a recent trawl of the RAM tape archive, Alton turned up ‘Yea Yea Baby’ (with the feel of Lloyd Price’s ‘Stagger Lee’, and surely a potential hit if released at the time), the Jimmy Reed standby ‘Can’t Stand To See You Go’, Lonesome Drifter’s RAM rockabilly classic ‘Teardrop Valley’ with Chico Chism’s rowdy band, and a stunning alternative take of the heartbreaking ‘It’s Alright (You Can Go)’ with studio chatter.

Incredibly, we are also able to present three strong live performances from a Louisiana Hayride show on 21 May 1960 with Mira Smith’s guitar accompaniment, as Grace Tennessee. As well as Mira’s tasteful guitar work throughout, the RAM recordings here variously feature top guitarists Johnny Winter, Billy Sanford and Grady Martin recorded at Cosimo in New Orleans, a Nashville studio, as well as the RAM facility and others.

After an unproductive stay with Capitol Records from 1963-65, Margaret turned, with Mira, to songwriting that involved a move to Nashville to join Shelby Singleton’s thrusting SSS International organisation. From that period, we have the Smith-Lewis song ‘I Want To Walk Through This Life With You’ that was transformed into a southern soul classic in 1969 by Ella Washington, and then by New Orleans’ Johnny Adams the next year. Adams had already elevated the songwriters’ signature song, ‘Reconsider Me’, into a country soul hit in 1969.

For more on Margaret Lewis’ stellar career, and also RAM Records, read the immaculately researched articles by Dominique Anglares in American Music Magazine (Nos. 134 and 137), also the new edition of my book, South to Louisiana: The Music of the Cajun Bayous. And watch out for an upcoming Ace vinyl EP, “The Country Soul Of Margaret Lewis”.