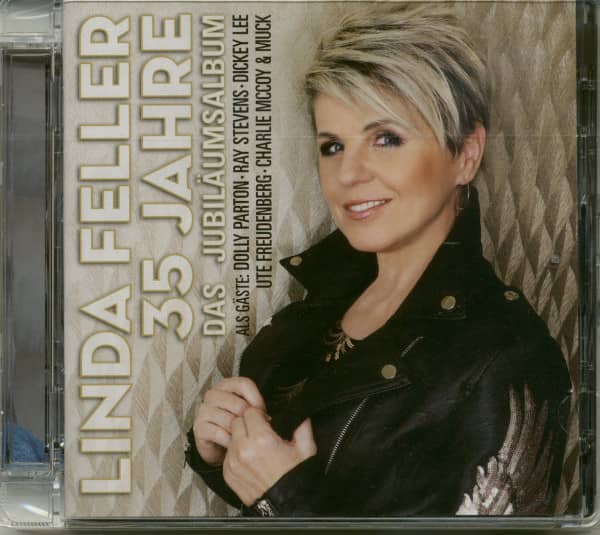 (AGR Television Records) 12 tracks
It is not known whether Linda Feller did in fact have sweet dreams in December 1985, but it is certain that Germany’s most successful country singer of today could not have dreamt of such an unparalleled career.

What is certain, however, is that Linda Feller was abruptly awoken from her dreams by a phone call at four o’clock in the morning. In this life-changing call, the then 19-year-old was asked if she would like to record a cover version of the Dolly Parton song “Apple Jack”. Neither the title “Apple Jack” nor the name Dolly Parton meant anything to the singer, who lived in the GDR. She listened to the song, learned the lyrics and the next day she stood in the studio and sang the song. The recording was a huge success. The sales figures of the LP “Country Roads” (Amiga Records) went through the roof and if the song hadn’t been imported from the “imperialist West”, Linda Feller would already have had a Gold Award in her hands just a few weeks after the release of her first country song.

Of course, the song that launched her career, “Apple Jack”, is an essential addition to “35 Jahre – Das Jubiläumsalbum” (“35 Years – The Anniversary Album”). When Dolly Parton, original interpreter and songwriter of the song, heard about Linda Feller’s album, she wanted the pair to sing “Apple Jack” together. In fact, the Queen of Country Music and Linda Feller should have sung the song together in Nashville, but this was unfortunately no longer possible due to coronavirus. The song was produced by Dolly Parton’s long-time producer Kent Wells. This recording alone makes “35 Jahre – Das Jubiläumsalbum” a very special album and shows the importance Linda Feller herself has in the American country scene. Indirectly, Dolly Parton also finds herself on the album for a second time: the person who first discovered Linda Feller, Muck, wrote the German lyrics for the Kenny Rogers & Dolly Parton duet “You Can’t Make Old Friends”. Together Linda Feller and Muck recorded “Mein letzter Freund” for the anniversary album.

Linda Feller and Ute Freudenberg have been friends for 30 years. The “Golden Hen” prizewinner re-recorded her greatest hit “Jugendliebe”, a song that everyone in East Germany can sing along to whether they are 8 or 80, in a country version with Linda Feller.

With the song “Rocky”, released in Germany in 1976 by Frank Farian, Dickey Lee already had a number 1 hit in the Billboard Country Song Charts one year earlier. Linda Feller and Dickey Lee have enjoyed a wonderful friendship since “Country Herz – Einmal Nashville & zurück” brought them together. At Linda Feller’s request, Dickey Lee interrupted his well-deserved retirement to record a German-English cover version of “Rocky” with her for “35 Jahre – Das Jubiläumsalbum”. Charlie McCoy, who was the musical director of Linda Feller’s performance at the Grand Ole Opry, can be heard playing the harmonica on the track.

In the early 70s Ray Stevens recorded the song “Turn Your Radio On” and made it into the charts worldwide. The song made it onto Linda Feller’s radio. From the beginning of her career, the German version of the song, “Schalt’ Dein Radio ein”, has been an integral part of Linda Feller’s live program. This makes it even more wonderful that she was able to record a German-English version of the all-time classic together with two-time Grammy winner Ray Stevens.

In addition to all the historic country songs and hits by Linda Feller, the five new compositions by Christoph Leis-Bendorff and Rudolf Müssig mentioned above complete the “35 Years – The Anniversary Album”. In particular, the single releases “Hätt’ ich ein andres Herz”, “Liebe ist ein andres Wort für Wahnsinn” as well as the current single “Ab jetzt” are also worth mentioning.