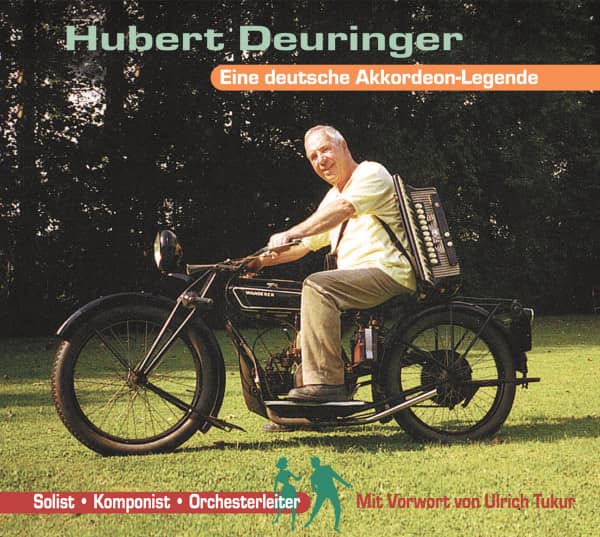 Welcome to the accordion bar!
Hubert Deuringer
& ,Sound magician and Grand Master of "Easy Listening" with the accordion 3-CD Digipak (8 pages) with 52-page booklet, 74 single titles. Total playing time approx. 231:20 minutes & ,
Exclusively equipped digipak (3 CDs) with extensive text and image material
Optimum sound quality through elaborate remastering& ,
The jazz inspired side of the extremely multi-faceted musician Hubert Deuringer as accordion soloist, composer and orchestra leader is the focus of this edition.
To be heard for the first time on CD: Hubert Deuringer's concertante works with the "Großen Orchester Erwin Lehn" (SDR) and the soloist Hugo Noth
Participation of excellent, internationally renowned soloists such as Art Van Damme, Diether Reith, Ack van Rooyen, Charly Antolini, Klaus Wunderlich, Edmund Högemann, Hans Koller, Bernd Rabe, Rudi Thiem and many more.
Rarities: Historical recording from 1952 with the orchestra Kurt Edelhagen and Hubert Deuringer as soloists as well as previously unreleased recordings from the private archive
Personal preface by accordion and Deuringer enthusiastic actor and musician Ulrich Tukur
& ,
He remained faithful to the accordion throughout his life
When leafing through the history of German popular music culture it becomes obvious time and again that many great names of this genre such as Paul Kuhn or Bert Kaempfert began their careers with the accordion. For (almost) all of them, however, this instrument was merely a "springboard". & ,
Not so for Hubert Deuringer: he not only remained faithful to the accordion throughout his life, but also cultivated his instrument for modern light music and made it hopeful in an unprecedented way. & , His compositions and arrangements, whether in various soloist combo string and wind instrumentations or with the large SWF radio orchestra. They sound timelessly modern and in no way lack the current "Easy Listening" standard. & , & ,
With this Deuringer edition, Bear Family presents a representative selection of music from the years 1952 to 1989, some of the finest titles that were broadcast on radio stations at the time! & ,We invite you to this sound journey with Hubert Deuringer.& ,
A soloist of international standing, a musician with swing and drive, an explorative aesthete. Hubert Deuringer who reinvented the sound of his instrument... & , & , & ,
The editors:& ,
Dr. Thomas Eickhoff
(*1966) studied musicology, music pedagogy, German language and literature, educational science as well as piano, singing, choir and orchestra conducting at the Westfälische Wilhelms-Universität Münster. He received his doctorate in 1996 and, after various teaching activities, held a professorship in music education at the University of Wuppertal from 1999 to 2001.& ,
The cultural historian, who works as a journalist and author, documents his interdisciplinary spectrum. Of music, literature, art and theatre in various contexts in media projects such as CD, book and music editions as well as biographical research. & ,& ,
Andreas Hermeyer
(*1964) studied at the Hohner Conservatory in Trossingen, among others in the class for modern accordion stylistics with Hubert Deuringer. Since 1985 he has been teaching accordion and piano at the Conrad-Hansen-Musikschule in Lippstadt as well as in preparatory studies.& ,
Freelance concert activity as accordion soloist, in ensembles and orchestras. In addition, there are numerous CD recordings and radio recordings. Hubert Deuringer The Hubert Deuringer StoryIt was shortly before Christmas 1964, when three accordionists played together in an ARD television gala moderated by Harald Juhnke entitled'Werner Müller's Schlagermagazin' accompanied by the RIAS Dance Orchestra under its director Werner Müller.

The best known of them at the time was Will Glahé, whose musical roots lie in piano playing and who was later celebrated as a typical "one-finger accordionist", especially in America. His undisputed recording successes were on a very simple level and by no means stand up to comparison with other accordion soloists of his time.

Albert Vossen - the second of them - brought an unusually jazzy note to his playing for German soloists of the time and was a great role model for an entire generation of accordionists - also for Hubert Deuringer, the youngest of the triumvirate playing in the gala.

Born on January 18, 1924 in Empfingen, Swabia, he continued the tradition of his "jolly men", as he called them, in a much more subtle way. What sometimes came across as very "rough" in those works sounds discreet, sensitive, swinging, graceful, melodious in Deuringer's improvisations. In order to assess the significance of the three soloists in the German music scene, the names of the other guests performing at this television event should be taken into account: Udo Jürgens, Peggy March, Bully Buhlan, Gerhard Wendland, Renée Franke, the Günter Kallmann Choir and others - as well as Rita Pavone and Paul Anka as foreign guests.

More than a stepping stone

The Hubert Deuringer Story
The accordion was an extremely popular solo, ensemble and orchestra instrument in the period from 1935 to about 1955. For many artists of distinction, this instrument was a "springboard"; Paul Kuhn, who died in 2013, began his career with the accordion, as did Bert Kaempfert - both have achieved world fame. Botho Lucas, known for the famous choir named after him, was also originally an accordionist. The list is not complete, there are many others.

One of them, however, remained true to his instrument, the accordion, despite a wide variety of musical talents and activities throughout his life - Hubert Deuringer. If you leaf through the history of German popular music culture carefully, your name appears again and again in many contexts. Whether as accordion soloist, ensemble and orchestra conductor, arranger, pop composer - surveys among experts on the subject of Hubert Deuri

nger have produced a uniform picture to this day: There is talk of the accordion, which always appears discreet and at the same time unmistakably colorful and virtuosic somewhere and somehow; and of a rare kind of the tonal representation of evergreens and new songs, which is accompanied by lovely and charming dancing.

When Deuringer gave up the baton in 1989 after more than 40 years with Südwestfunk, among others as conductor of the large radio orchestras in Baden-Baden and Kaiserslautern, his countless arrangements and compositions ranked among the public favourites and were packed into the "ARD suitcase", since then they can be heard - and this until today - on almost all ARD stations.

Hubert Deuringer StoryMusik has always played a role in Deuringer's ancestors. Hubert himself took up the piano at the age of seven, shortly afterwards he played the clarinet in the Empfinger Musikverein, then moved to the Daimler-Benz Band in Stuttgart at the age of 14. He also earned money as an errand boy in the racing car department of the automobile group.

There he had contact with racing driver legends such as Rudolf Caracciola or Hermann Lang. "I provided the Schumis of that time with meat cheese rolls and brick cheese," he says proudly. He studied music in the Hohner city of Trossingen, where he found his way to the accordion, which marked the beginning of a great German musical career...