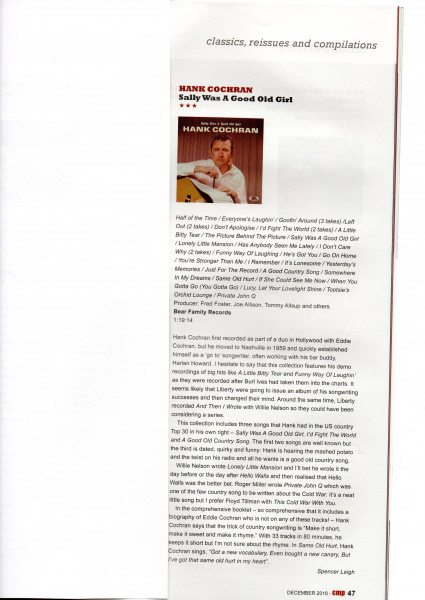 Half of the Time / Everyone's Laughin' / Goofin' Around (3 takes) /Left Out (2 takes) / Don't Apologise / I'd Fight The World (2 takes) /A Little Bitty Tear/ The Picture Behind The Picture / Sally Was A Good Old Girl / Lonely Little Mansion / Has Anybody Seen Me Lately / I Don't Care Why (2 takes) / Funny Way Of Laughing / He's Got You / Go On Home / You're Stronger Than Me / I Remember / It's Lonesome / Yesterday's Memories / Just For The Record /A Good Country Song / Somewhere In My Dreams / Same Old Hurt / If She Could See Me Now / When You Gotta Go (You Gotta Go) / Lucy, Let Your Lovelight Shine / Tootsie's Orchid Lounge / Private John Q Producer: Fred Foster, Joe Allison, Tommy Allsup and others Bear Family Records 1:19:14

Hank Cochran first recorded as part of a duo in Hollywood with Eddie Cochran, but he moved to Nashville in 1959 and quickly established himself as a 'go to' songwriter, often working with his bar buddy, Harlan Howard. I hesitate to say that this collection features his demo recordings of big hits like A Little Bitty Tear and Funny Way Of Laughin' as they were recorded after Burl Ives had taken them into the charts. It seems likely that Liberty were going to issue an album of his songwriting successes and then changed their mind. Around the same time, Liberty recorded And Then I Wrote with Willie Nelson so they could have been considering a series. This collection includes three songs that Hank had in the US country Top 30 in his own right — Sally Was A Good Old Girl, I'd Fight The World and A Good Old Country Song. The first two songs are well known but the third is dated, quirky and funny: Hank is hearing the mashed potato and the twist on his radio and all he wants is a good old country song. Willie Nelson wrote Lonely Little Mansion and I'll bet he wrote it the day before or the day after Hello Walls and then realised that Hello Walls was the better bet. Roger Miller wrote Private John Q which was one of the few country song to be written about the Cold War: it's a neat little song but I prefer Floyd Tillman with This Cold War With You. In the comprehensive booklet — so comprehensive that it includes a biography of Eddie Cochran who is not on any of these tracks! — Hank Cochran says that the trick of country songwriting is "Make it short, make it sweet and make it rhyme." With 33 tracks in 80 minutes, he keeps it short but I'm not sure about the rhyme. In Same Old Hurt, Hank Cochran sings, "Got a new vocabulary, Even bought a new canary, But I've got that same old hurt in my heart".
Spencer Leigh
DECEMBER 2018 - CMP 47