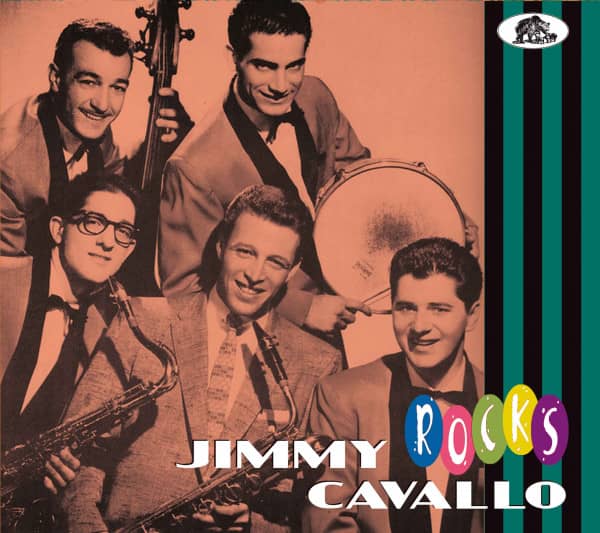 1-CD (Digipak) with 36-page booklet, 27 tracks. Total playing time approx. 70 min.
The 36-page color booklet includes the Cavallo story written by noted Chicago music journalist Bill Dahl, plus rare photos, illustrations and discographical details.
Rock, Rock, Rock
Among Jimmy Cavallo's greatest achievements is his appearance in the 1956 rock 'n' roll film 'Rock, Rock, Rock.' In addition to the title song, he can be seen and heard on two more pieces. The 'Rocks' compilation on Bear Family Records® covers Jimmy Cavallo's entire career, from his first recordings in 1956, through the aforementioned film recordings, the complete Coral material and the rare singles on Sunnyside, Hand and Darcy. In addition, as a special treat, there are two live recordings from an Alan Freed show in 1956, a selected track from a 1972 EP, and two more recent recordings from the Blue Wave label. Jimmy Cavallo was active until his death in 2019.
Cavallo or Cavello?
This mystery, too, is revealed in Bill Dahl's Jimmy Cavallo story in the 36-page color booklet. The well-known music journalist from Chicago has not only meticulously researched, he also consulted several interviews that he conducted exclusively with Jimmy Cavallo at the time. Therefore, Dahl's Cavallo bio contains many previously unknown details and anecdotes. Of course, rare photos and illustrations are again included, and a discography by Bill Dahl and Marc Mittelacher round out the album. Rock, Rock, Rock!

I Feel That Old Age Coming On