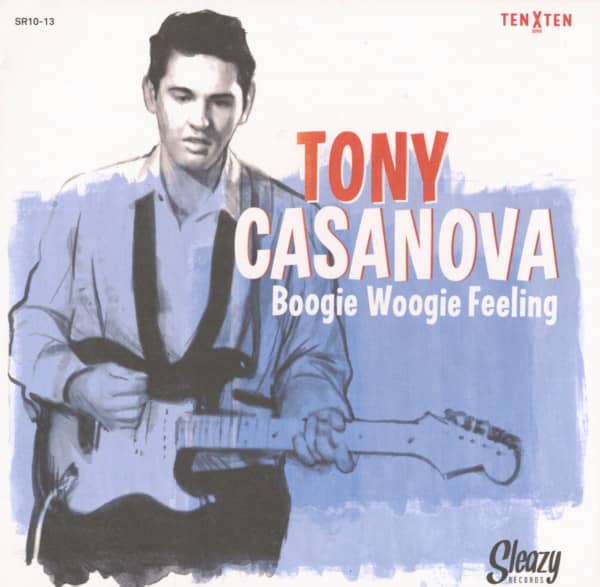 (2016/Sleazy) 12 tracks - The complete recorded out put of Latino Rocker Tony Casanova, who was born in 1942 in Puerto Rico. His family moved to the United States in 1950 to Pacoima, Los Angeles where Casanova visited the Pacoima Junior High together with Ritchie Valens! Tony Casanova and Ritchie Valens became friends and jammmed in the garage of Tony's family home. Tony Casanaova actually was the guy who finally introduced Ritchie Valens to Bob Keane, the owner of the Del-Fi label. Casanova himself had his first release on the Crest label with 'Yea! Yea! Come Another Day'! Tony Casnova recorded five more 45rpm records for the American label, Dore, Chariot, Imperial and Dot! Casanova never reached the success of Ritchie Valens but his 45rpm records are well sought after in the nowadays and real collector's items! All recordings were made between 1958 and 1969! (Bear Family Records - nf)

Tony Casanova was born Jutilio Perez in Puerto Rico on November 4, 1942. He moved to California with his family in 1950, as many Puerto Ricans did at the time. Puerto Rico was an unincorporated territory of the United States and granted U.S. citizenship. Jutilio grew up with Richard Valenzuela in the San Fernando Valley and were classmates at Pacoima Junior High School. They became friends, jam- ming on their guitars before Perez changed his name to Tony Casanova and Valenzuela became Ritchie Valens.

Ritchie was only 17 when he debuted on Del-Fi. Jutilio was a year younger when he got signed as Tony Casanova to Crest Records, using the same studio and some of the same musicians as Valens in the late summer of 1958. The fol- lowing summer saw him performing in a night club scene of the Hollywood movie ‘The Diary Of A High School Bride,’released by American-International, before he switched to Doré Records in September of 1959. Casanova continued making recordings as Tony Casanova (for Chariot and Capi- tol) and as Tony Ray (Imperial and Dot) in the sixties be- fore he left the music business to start working as a prop- erty manager.