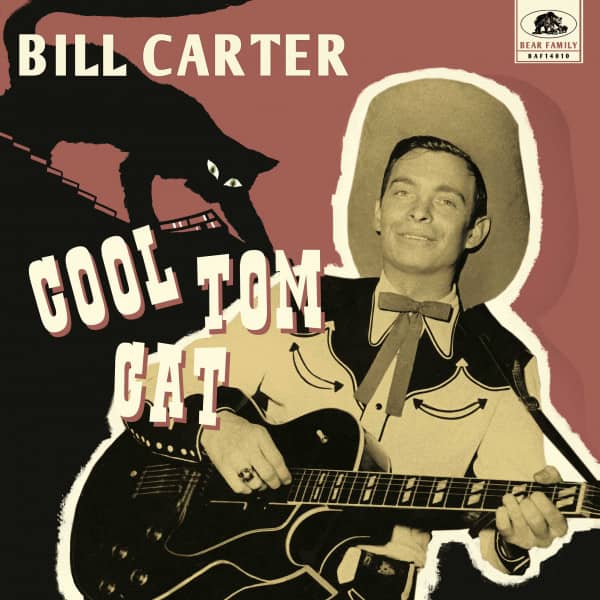 The first 200 orders from customers (dealers excluded) get a signed postcard from Bill Carter!
Bill Carter was born in 1929 in Eagleton, Arkansas, moved with his family to Oklahoma in 1937 and six years later to Indio in California. His family encouraged his interest in music at an early age and provided funding for singing lessons when Bill was in his teens. Local radio stations presented him before he joined the US Air Force in 1949. During his military service in California he formed his first C&W bands and performed in the San Francisco area and even at a radio station in San Antonio, Texas.
After completing his military service in 1953 Carter joined Jim DeNoone's country band as a singer and performed at the 'California Hayride' in San Francisco. In the same year, Bill Carter was the vocalist on the band's recording sessions for Gilt-Edge Records. Finally, he formed his own trio, with whom he worked regularly over the next five years, pursuing the goal of becoming known beyond the local area. Between 1956 and 1961, Carter recorded under his own name for small and medium-sized labels such as 4-Star, Republic, Tally, Black Jack, Honey B, 'D', Rural Rhythm and Ozark. The up-tempo number 'I Wanna Feel Good', produced for Tally in Bakersfield, California in 1957, became his biggest hit and opened the doors to the 'Louisiana Hayride' and the 'Grand Ole Opry'. Finally, in 1959 he ventured into Rockabilly and recorded 'Cool Tom Cat'.
In the following years Carter followed a new musical orientation and also produced gospel oriented material, not only under his own name. He took part in other recording sessions as a singer and worked as a producer. In the first half of the 1960s he participated in recordings for no less than thirteen different record companies. It was during this period that Bill Carter became a convinced Christian and met a brother in spirit in the Baptist preacher Leonard Sipes, who formerly called himself Tommy Collins. From then on, Carter's main focus was on Christian music, which he also brought to the stage with his own formation, the Bill Carter Singers, founded in 1969.

After he started recording for Lewis Talley and Fuzzy Owen's label in the mid-1950s, Cliff Crofford began lending his songwriting talents to other singers on the roster, such as the San Francisco Bay area's Bill Carter. The Crofford-penned I Wanna Feel Good  was Bill's first recording for Tally. The heavily percussive teen anthem features tastefully sparse Jordanaires-style vocal accents reminiscent of Elvis' recordings in this era. "Billy Mize and Bonnie Owens and Fuzzy Owen did the background singing," Carter remembered. "Roy Nichols played lead, and Henry Shropshire – who went by Henry Sharpe - played drums.

Henry was really good to me on that session. He really took me under his arm and encouraged me a lot." Owen and Talley were eagerly pursuing national recognition for their tiny outfit, and traveled extensively to promote their rockabilly sounds. "We took a promotional tour, Fuzzy and Louie and myself, to the South," Carter remembered, "and I sang on the Louisiana Hayride as a result of that. Buck went with us. Me and Buck sat in the backseat of the Cadillac. Buck had a spot and I had a spot, too, on the Hayride 'cause of Tally Records. That really opened up a lot of doors for me in country music." Curiously, Bill Carter never met Cliff Crofford in the 1950s, though the two struck up a friendship later in life.