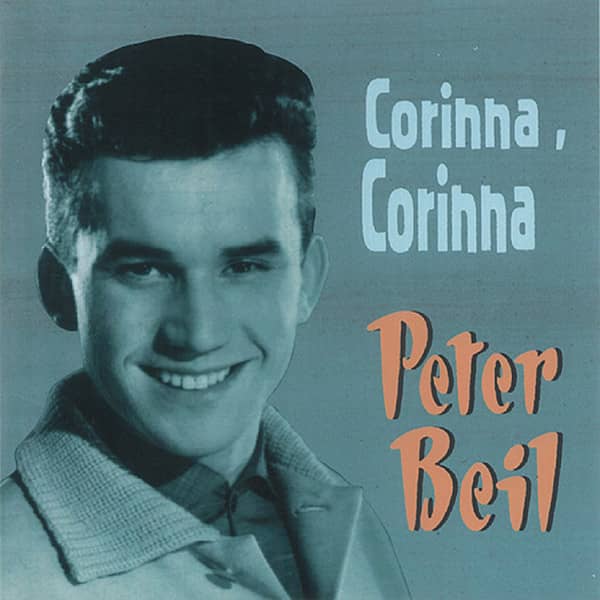 1-CD with 10-page booklet, 30 single tracks, playing time 75:05 minutes.
Another trip through the pop world of the sixties, this time with Peter Beil. With the German version of the Ray Peterson hit Corinna Corinna in 1961, he made it into the upper league of the Schlagerfach. He was represented in the charts for 33 weeks.
Thanks to his profound musicality, he has been one of the most successful interpreters on the German hit market for years and was able to place himself on the bestseller lists with a dozen songs.
The CD contains a cross-section of his Fontana and Philips recordings from 1959 to 1965, including cover versions by Pat Boone, Ricky Nelson, Johnny Tillotson and the Cascades.
The titles published in 1961-63 under the pseudonym Ricky-Boys are likely to be special treats for all oldie fans.
Peter Beil can be heard in duet with Franco Duval on some of these songs, which are now being released on CD for the first time.
Among the total of 30 recordings there are many that still have lost none of their charm at that time and don't sound a bit dusty. And your train travels through the night or number 1 in my heart where Peter Beil, who later established himself in other musical areas, impressively proves his vocal qualities.

Born in Hamburg on July 9, 1937, he discovered his preference for trumpet playing as a member of a trombone choir at an early age. Beil enrolled for this instrument at the Musikhochschule, gave up jobs in a textile company and as an airport employee. With the Crazy Combo he caused a regional sensation as an amateur musician, and the versatile artist was discovered in Peter Frankenfeld's TV show'Toi Toi Toi'.

Immediately afterwards Beil got a contract as a singer with Philips, other records were released - unusual for the time - on Amiga in the GDR. In 1961 Peter Beil made his big breakthrough with Corinna Corinna, the German version of the Ray Peterson hit. Also with titles like Carolin, Carolina and Dein Zug fährt durch die Nacht and Kleine Nervensäge Monika he could place himself in the German charts. Until 1970 he brought another seven songs to the hitlists. Also under the pseudonym Ricky Boys - here he sang a duet with himself - Beil scored a goal: Hello, Mary-Lou. Later Franco Duval became his partner.

Beil was also active as an actor, for example in the music and entertainment film'Tanze mit mir in den Morgen' alongside Gerhard Wendland, Carmela Corren, Udo Jürgens and Rex Gildo.

The highly qualified Hamburg native appeared in over 300 television shows, and at the end of the 1970s he took over musical direction when the'ZDF Hitparade' went on a major tour. He appeared in the programme itself, entitled Der Blitz schlägt ein, and in 1984 he worked as First Trumpeter for Hazy Osterwald in his orchestra.

Peter Beil continued his own show programs of 60 (solo: vocals, trumpet) and 150 minutes (with a trio:'hits, swing and jazz'). In August 2005 he played Il Silenzio at the grave of the late Ilse Werner in Potsdam.

The musician, who is popular with fans and colleagues alike, has a permanent place in the annals of the German hit and will remain unforgotten as a sought-after instrumentalist.