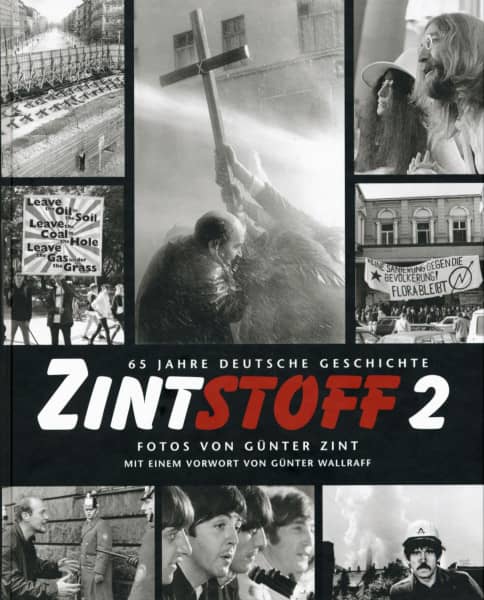 Foreword by Günter Wallraff
GÜNTER ZINT: PHOTOGRAPHIC ENLIGHTENER AND PHILANTHROPIST
Günter Zint is not only one of my most reliable friends, but also one of the "last people" I know. Despite his professionalism and his photographic skills, he is not only an eyewitness to the events, but also usually a person affected. Only seemingly he acts as observer and reporter, almost always he is part of the events. He also took a picture of the rubber truncheon that was hurling down on him. He confronts attacks with his camera. Before Zint takes photos, before he relies on the technology of his equipment, he takes part in political events himself, whether it is in a children's shop, district or tenant initiative or when he documents his commitment to the fight of the nuclear power generation through his work.

He also risked the consequence that he would be put on the street by a big magazine (SPIEGEL) because he not only took pictures of the student demonstrations in 1968, but also participated in them. The director of the publishing house then confronted him with investigations by the Office for the Protection of the Constitution ("We see the reasons for your dismissal only in your person and not in the quality of your photos") and dismissed him from a fixed contractual relationship. During this time, when Zint was still doing well economically - he was the best paid photographer at the magazine - he used his status and standards to support political groups organizationally, but also financially. He gave his second car to an organization that enabled GIs who did not want to take part in the Vietnam War to escape to Sweden. By participating in the events, Günter Zint brings different photos to the editorial offices than his colleagues, who see their professionalism in always keeping a cool overview. This participatory observation takes the voyeuristic aspect out of his photos, which is especially noticeable in his "Kiez-Photos".

Günter Zint still has friendly contacts with all the people depicted in the book "DIE WEISSE TAUBE FLOG FÜR IMMER DAVON ...", and I myself got to know some of these people during my time in Hamburg. These people are victims, but not Zint's victims. Domenica, Ruth, Dieter, Myriam, Heidi are victims of a society that is ashamed of them, from which they were excluded. When the tabloids want to show this society how decent and nice it is in contrast to this "scum", they send their photographers to the "neighbourhood" to hunt down these outcasts. Günter Zint never took part in this hunt, although this would have been a solution for his economic situation. It speaks for Zint that these tabloids are not able to do anything with his photos in the least cases...