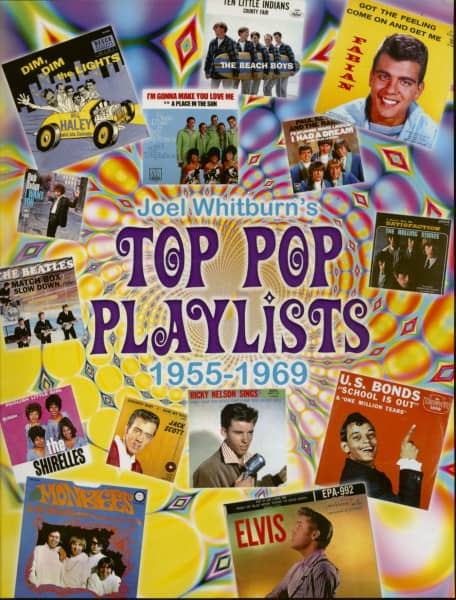 Each Top Pop Playlist features the Top 25 songs of the month. Songs are listed only once - in the month that they first reached their peak position. That makes for 174 separate and unique playlists as each of the 4,450 songs can only appear on one playlist - no repeats! Joel determined each month's Top 25 hits according to their ranking by peak position in his Pop Annual 1955-2011 book, which he compiled from Billboard magazine's pop (Best Sellers/Disc Jockey/Juke Box/Top 100) and Hot 100 charts.

Framing each playlist are seven definitive photos of either picture sleeves or sheet music covers that display the character and trends belonging to that month, for a total of 1,218 photos.

Each yearly Cross Reference page lists, by artist, the ranking and month(s) where an artist's hits can be found.

All #1 hits are highlighted in red.

Also new to any of Joel's books is his "Rock 'n' Roll' Road To The Top 40," which shows the chronological progression, by song, of rock 'n' roll from the sidelines to the top of the charts.

Oldies fans and those nostalgic for radio's glory days will linger in these pages.