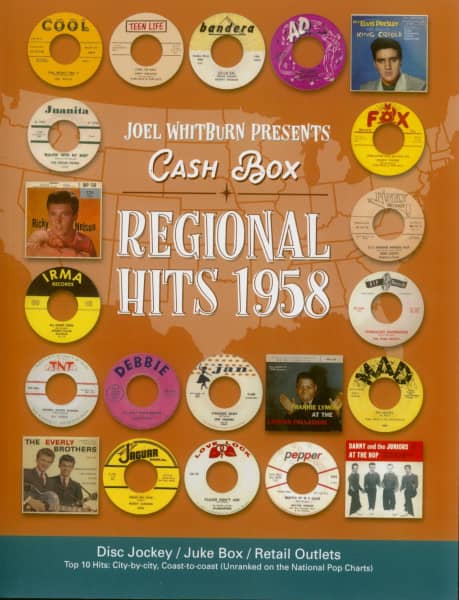 Please inform me as soon as the product is available again.
$44.20 *

112 pages/Seiten, 28 x 21,6 x 0,5 cm, Paperback, English
It's the third edition in our new series covering the thousands of 45 rpm records that appeared on regional charts across America.
The record business was booming in 1958, and the influx of new sounds, new songs, new artists and new labels made competition for the 100 weekly coveted spots on the national charts rarified air.
To rediscover the long lost gems of this era, Joel researched the regional charts of Cash Box magazine, city by city, town by town, coast to coast.

This artist-by-artist anthology uncovers all of the records that only appeared on the local listings (Disc Jockey, Juke Box and Retail Outlets) and did not appear on the national pop singles charts of Billboard, Cash Box or Music Vendor magazines. Now, these rare records have definitive research showing the exact dates and places that they tasted fame.
A Note from Joel:

By 1958, I was really into collecting records. I could bring my records with me in a little carrying case and play them on my portable player. The 45 rpm had exploded by ’58 – they were not as fragile as their predecessor, the 78 rpm, and they were a convenient size.

And the songs! The artists! The Platters, The Every Brother, and Elvis and 1000s of others! I remember going to Radio Doctors record shop in Milwaukee and each week there would be scores of new singles -- many on small, independent labels. And some were never on the national pop singles charts.

1958 was a huge year for the breakout of the 45rpm single.  The 78rpm was pretty much dead and the 45s were being issued in 'record' numbers.  The small and rare independent labels (some of which are shown on this book’s front and back cover) were flooding record shops from coast to coast.

Rockabilly records from small towns to big cities were booming all across the USA.  Many great tunes lingered on their local Top 10 surveys; a staggering amount of hot new releases each week lead to a bottleneck in breaking on to the bustling national charts.

This is why I researched these Top 10 Regional charts -- to rediscover and spotlight these lost local legends, and showcase them on colorful pages.  Now they finally have definitive research showing the exact dates and places they tasted fame.