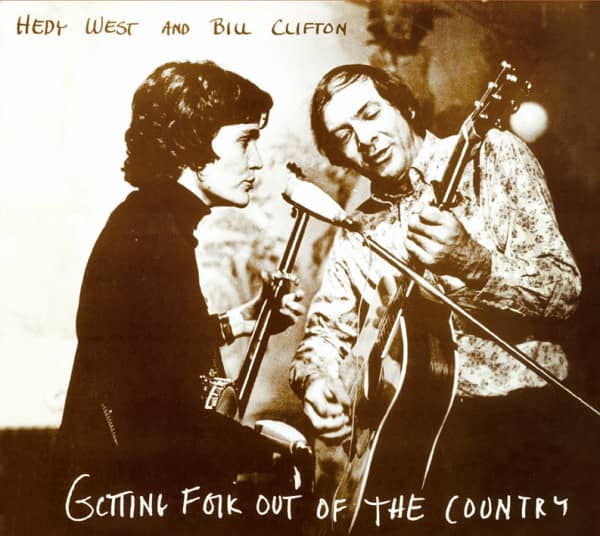 Hedy West& Bill Clifton: Getting Folk Out Of The Country

In the '70s I booked various American artists to play the German folk clubs. Now, on the occasion of Bear Family's 35th anniversary, I'm getting sentimental and would like to look back on that era.

Over the years Bear Family has released several productions by Hedy West, Bill Clifton, Tracy & Eloise Schwarz. Hedy West produced an album by Ed McCurdy for Bear Family, which included his composition Last Night I Had The Strangest Deam, sung by himself for the first time. For years, this anti-war-song had been covered by many other artists, including Pete Seeger and Johnny Cash - it was even sung in 1989 at the fall of the Berlin Wall. Ed, who was watching the scene on TV in Canada, rang me and was totally enthusiastic.

Apart from Bill Monroe's German concerts (4-CD / 1-DVD Box-Set), we have published his complete studio recordings on a series of CD box-sets. Among these was a fascinating great moment in country music - as expressed by Walter Fuchs: This memorable meeting of two legends - Hedy West and Bill Clifton - is now revived again: Hedy West, who died in 2005, and Bill Clifton, who was inducted into the Bluegrass Hall of Fame in Nashville, had met in a London studio in 1972 to produce an album together. These recordings were first issued by Richard Weize on Folk Variety and soon afterwards on Bear Family.

The album caused quite a stir on the scene. It was even referred to as an exceptional great moment in country music. After all, both artists came from completely different social backgrounds and different music scenes. Bill Clifton was upper class, Hedy West was more working class. Both of them had been to university, and they were both involved in folk music of the underprivileged. Hedy West, composer, singer, brilliant banjo and guitar player, was an expert in American folk songs, whereas Bill Clifton, composer, singer and virtuoso on the guitar and autoharp, was for many years the successful leader of a bluegrass band, the Dixie Mountain Boys. He also organized the first Bluegrass Festival.

Today the music of both artists would be categorized as 'singer/songwriter' or 'Americana'.

This legendary album from 1974, which was recorded two years earlier by a lucky coincidence, has now been reissued on CD with the original sleeve art. The voices and instruments of the two artists blend into a charming, timeless work of art. The songs are mostly traditionals such as Whitehouse Blues, Curley Headed Baby, and Pictures From Life's Other Side. The Song Angel Band is accompanied by Bill Clifton's family. This music makes you listen; it's simply 'cool', and the album is an absolute must-have!

Article properties: Hedy West& Bill Clifton: Getting Folk Out Of The Country