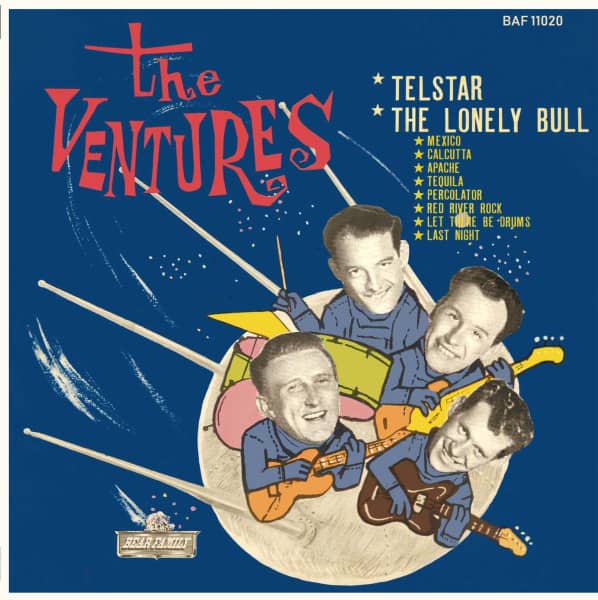 BEAR FAMILY Vinyl Club Exclusive - limited collector's edition, order now from Bear Family's Shop and Mailorder
• 10inch LP (limited edition - colored vinyl)
• 12 tracks. Unique 10inch in our 11000 collectors series
• Reproduction of the rare original album cover from Japan.
• Painstakingly remastered for highest fidelity and pressed on high quality vinyl!
• Limited to 500 copies!
These great instrumental recordings may be widely known. Unique, however, is the 25cm version of this album, released in 1962 only in Japan on the local Liberty label. In the USA, the recordings appeared on the Ventures' ninth LP, an extremely successful album peaking at position #8 in the billboard charts and was awarded a gold record for more than half a million sold copies.
Over the years, the LP has been re-released countless times. But the reproduction of the Japanese first edition is unique, the original with this cover is hard to find - and we put two bonus tracks on top of the ten original tracks and had the whole thing sensitively remastered and pressed on high-quality colored vinyl. Fits perfectly into our collector's series with limited 10inch records!

For a slice of quite-credible surf-rock presented nicely, look no further than The Ventures Play Telstar – The Lonely Bull.

Presented on red vinyl, this Bear Family re-issue is worth checking out. It is a worthy addition to the 11000 series, with the rare cover art adding an extra note of authenticity. As a stand-alone collectable or as part of the series, this release holds up well. Despite being a little pedestrian, the content is strong. Side B holds its own, overtaking side A in terms of energy and life. A definite stand-out track is Let There Be Drums; It seems to have the most punch and spontaneity.

Overall, this is a worthwhile release. As usual, Bear Family make it feel genuine and authentic by recreating the style of the label logo and presenting the back cover intact in its original form. For a slice of quite-credible surf-rock presented nicely, look no further than The Ventures Play Telstar – The Lonely Bull.

This latest instalment of the ongoing Vinyl Club Exclusive series comes in a vivid red vinyl and the pressing is limited to the usual 500 copies - check out how they've adapted the label to incorporate Bear Family into the Liberty logo...very neat. Highly

This latest instalment of the ongoing Vinyl Club Exclusive series comes in a vivid red vinyl and the pressing is limited to the usual 500 copies - check out how they've adapted the label to incorporate Bear Family into the Liberty logo...very neat. Highly recommended.

Write an evaluation
Evaluations will be activated after verification.
Weitere Artikel von The Ventures
The Ventures: In The Vaults Vol. 5 Art-Nr.: CDCHD1407

$11.26 *
Show all "The Ventures" articles
Presse Archiv - The Ventures Play Telstar - The Lonely Bull - now dig this
Presse Archiv - The Ventures Play Telstar - The Lonely Bull - now dig this No stran-gers to a concept album, this one was a set of cover versions of well-known, hit instrumentals from both their peers within the surf rock fraternity and the more standard pop field. The liner notes to the American release reassure the listeners that all the songs have been 'Venture-originated', adding that "they handclap, finger-pop and foot-stomp their way through what may be the most exciting album of their exciting careers"! While none of the covers replace the need for your originals by the likes of The Tornados, Sandy Nel-son, The Champs, The Shadows or Johnny & The Hurricanes, all the versions here are bang on the money and work really well. You'd expect nothing less but what's especially pleasing are the covers of Herb Alpert's 'The Lonely Bull' and Bob Moore's 'Mexico', both soaked in Latin rhythms and guitars. This sort of high-end 'Top Of The Pops' compilation appealed to the masses and it peaked at No.8 on the album charts in the States, becoming their highest placed long-player and also gaining gold record status. This latest instalment of the ongoing Vinyl Club Exclusive series comes in a vivid red vinyl and the pressing is limited to the usual 500 copies - check out how they've adapted the label to incorporate Bear Family into the Liberty logo...very neat. Highly recommended.
05.11.2019
Presse Archiv - The Ventures Play Telstar - The Lonely Bull - oltimereviews
Presse Archiv - The Ventures Play Telstar - The Lonely Bull - oltimereviews Bear Family Records have re-issued 1962 album The Ventures play Telstar – The Lonely Bull as part of their 11000 collectors series. This is a very special reproduction of the 10-inch Japanese pressing, including the hard-to-find rare cover featuring artwork of the group with a space-craft. The 11000 series from Bear Family Records is a selection of limited edition vinyl reissues of rare and sometimes pricey vinyl collectables. The album is available in many forms on several formats, Is this edition worth picking up? The Music British listeners may equate the sound and style with being like The Shadows. In so much as The Ventures do instrumental covers of popular songs, this is true. In the cases of some tracks, it feels somewhat like they are capitalising on a trend for background-sound for parties and dances in the early 1960s. Many tracks are of a very similar vein as the library music used in the TV action shows produced by ITC and ATV in the mid to late 60s. Their interpretation of popular tunes are competent but a little pedestrian. Sometimes the elements can seem like they are more of an exercise in experimenting with different sounds. It all ends up achieving a similar effect to that of the original or best-known version, though, with every number very well executed and enjoyable. The whole album has presumably the desired effect: it is very tempting to get up and get moving. Disappointingly, the renditions still have a rather safe vibe about them.
09.12.2019
Similar products Customers also bought Customers also viewed
Similar products
Dynamite - Magazin: Nr.19 - Magazin & limited Single Art-Nr.: 0041319