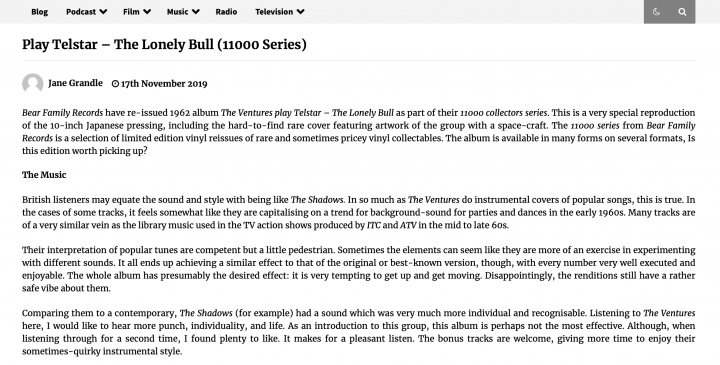 Play Telstar – The Lonely Bull (11000 Series)
Jane Grandle
17th November 2019
Bear Family Records have re-issued 1962 album The Ventures play Telstar – The Lonely Bull as part of their 11000 collectors series. This is a very special reproduction of the 10-inch Japanese pressing, including the hard-to-find rare cover featuring artwork of the group with a space-craft. The 11000 series from Bear Family Records is a selection of limited edition vinyl reissues of rare and sometimes pricey vinyl collectables. The album is available in many forms on several formats, Is this edition worth picking up?
The Music

British listeners may equate the sound and style with being like The Shadows. In so much as The Ventures do instrumental covers of popular songs, this is true. In the cases of some tracks, it feels somewhat like they are capitalising on a trend for background-sound for parties and dances in the early 1960s. Many tracks are of a very similar vein as the library music used in the TV action shows produced by ITC and ATV in the mid to late 60s.
Their interpretation of popular tunes are competent but a little pedestrian. Sometimes the elements can seem like they are more of an exercise in experimenting with different sounds. It all ends up achieving a similar effect to that of the original or best-known version, though, with every number very well executed and enjoyable. The whole album has presumably the desired effect: it is very tempting to get up and get moving. Disappointingly, the renditions still have a rather safe vibe about them.

Comparing them to a contemporary, The Shadows (for example) had a sound which was very much more individual and recognisable. Listening to The Ventures here, I would like to hear more punch, individuality, and life. As an introduction to this group, this album is perhaps not the most effective. Although, when listening through for a second time, I found plenty to like. It makes for a pleasant listen. The bonus tracks are welcome, giving more time to enjoy their sometimes-quirky instrumental style.

Although the US release originally had 6 tracks on each side, this is the Japanese release. To bolster that 10-track listing, Bear Family has added two bonus tracks. It may have made more sense to add the two tracks left off from the US release. However, that may have felt incongruous as that might feel like the US version had simply placed into the Japanese packaging. Adding two separate tracks preserves a little more of the authenticity.
Conclusion

Presented on red vinyl, this Bear Family re-issue is worth checking out. It is a worthy addition to the 11000 series, with the rare cover art adding an extra note of authenticity. As a stand-alone collectable or as part of the series, this release holds up well. Despite being a little pedestrian, the content is strong. Side B holds its own, overtaking side A in terms of energy and life. A definite stand-out track is Let There Be Drums; It seems to have the most punch and spontaneity.

Overall, this is a worthwhile release. As usual, Bear Family make it feel genuine and authentic by recreating the style of the label logo and presenting the back cover intact in its original form. For a slice of quite-credible surf-rock presented nicely, look no further than The Ventures Play Telstar – The Lonely Bull.