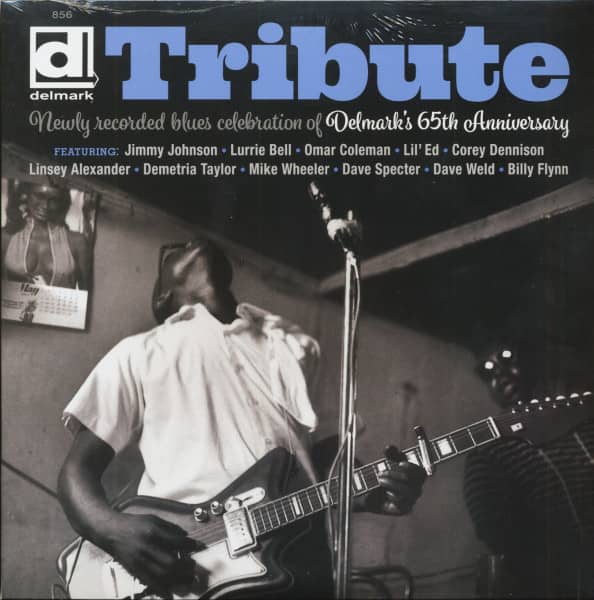 DELMARK RECORDS, a Chicago-based blues and jazz record company. is the oldest active record company still owned and operated by its founder. Bob Koester is 85 years young now and to celebrate Delmark's 65th anniversary here's Tribute, an album featuring blues artists who have recorded for Delmark in this century paying tribute to Bob and some of the artists that recorded for the label in the 1960s and 70s.
DELMARK RECORDS
Bob would sometimes refer to Delmark as "the house that Junior built". Wells' Hoodoo Man Blues tssesi is still the big-gest selling album on the label and is considered one of the greatest blues albums ever recorded. Delmark is also a jazz label and has more jazz albums in its catalog than blues; however, it's been the blues that has ensured Delmark's continued existence. Bob Koester, 20 then but 85 years young now, started Delmark in St. Louis in 1953 recording the Windy City Six a traditional jazz band. (Bob hates the phrase Dixieland Jazz) A transplant from Wichita, Kansas, Bob learned the whereabouts of forgotten blues musicians from the 1920s and '30s living in St. Louis including Speckled Red and Big Joe Williams.
In the case of Big Joe, it may have been Joe who tracked Bob down. I remember Bob telling me Big Joe came into his record store and pulled an old plugger (flyer) out of his guitar case to prove that he was indeed the original Big Joe Williams. Bob joked that Big Joe was pretty good at sniffing out a record deal. Sure enough, after Speckled Red's The Dirty Dozens came out as Delmar 601 Big Joe was the second blues artist to have a Delmark LP. Soon afterwards Bob moved to Chicago for a record label purchase that never happened. but it led to the beginning of his retail operation Jazz Record Mart and put Delmark in the city with the most blues activity. After recording Sleepy John Estes. Curtis Jones and one more Big Joe session.
Hoodoo Man Blues DELMARK 612, was the first electric blues album to be recorded on Delmark. Buddy Guy was thought to be under contract to Chess. so he was billed as Friendly Chap for the first 7,000 copies. Bob saw many blues artists on Chicago's west and south side in neighbor-hoods to which white people generally did not go.
Bob became known for taking young white blues fans into these clubs. Magic Sate, J.B. Hutto, Otis Rush, Carey Bell, Jimmy Dawkins, Luther Allison. Mighty Joe Young, Robert Jr. Lockwood. Roosevelt Sykes and Jimmy John-son all recorded for Delmark from the late '60s through the '70s, an impressive legacy. Delmark was relatively dormant through the 1980s as Bob focused more on his re-tail operation. Delmark returned to the studio in the '90s but ramped it up big time in 1992 with the purchase of its own recording equip-ment. Since then the number of blues albums in the catalog grew from 50 to 250.
I started at Delmark in 1987 and was fortunate to be part of the growth and expansion. It enabled me to produce blues and jazz albums starting under Bob's guidance and to become a recording engineer under Paul Serrano's guidance. It was Paul (RIP) whose recording equipment Delmark purchased. He was our head engi-neer until 2002 when he handed me the reins. In 1993 we issued two 40th anniversary packages; one was jazz and one was blues. Since then there have been anniversary albums issued every 5 years, and for the 55th anniver-sary we also issued a live concert DVD that was videotaped at Buddy Guy's Legends in 2008. Bob and Buddy both received awards from the NARAS organization that night commernorating the induction of Hoodoo Man Blues into the Grammy Hall of Fame.
This album, Tribute, is all newly recorded performances of Del-mark recording artists who have recorded for Delmark in this century paying tribute to artists who recorded for Delmark in the 1960s and '70s (with the exception of IA. Ed, on loan to Delmark, and Big Time Sarah being a latter era Delmark artist). As I'm writing this plans are moving for-ward with the big Delmark Tribute to be per-formed at the 2018 Chicago Blues Festival on Friday June 8. culminating on the main stage of Pritzker Pavilion in Millennium Park. The free event will feature all the artists on this album and more. It's very moving that the city is honoring Bob in this way. Other multi-artist Delmark anniversary shows will be taking place through the rest of this year, including a couple in the clubs during the same week as Blues Fest. Bob spends most of his time these days operating Bob's Blues and Jazz Mart at 3419 W. Irving Park Road in Chicago just a mile west of Delmark House.
It's open from 10:30am to 6:30pm Monday through Saturday. It's been a couple years now since he sold the large down-town retail operation Jazz Record Mart. I celebrated my 30th anniversary at Delmark and recently turned 60 so I've spent half my life at Delmark and am honored to be part of Delmark's legacy. Bob and his wife Sue (who also works at Delmark and has played a large role through the years) are like family to me. It'll be a blast seeing what the future holds. And so I'll sign off by sharing something Bob likes saying to people as they leave his store: “You be good and I'll be as good as I can".
I think he may have gotten that from Speckled Red. Just don't ask Bob to recite the lyrics to The Dirty Dozens!
STEVE WAGNER • MARCH 2. 2018