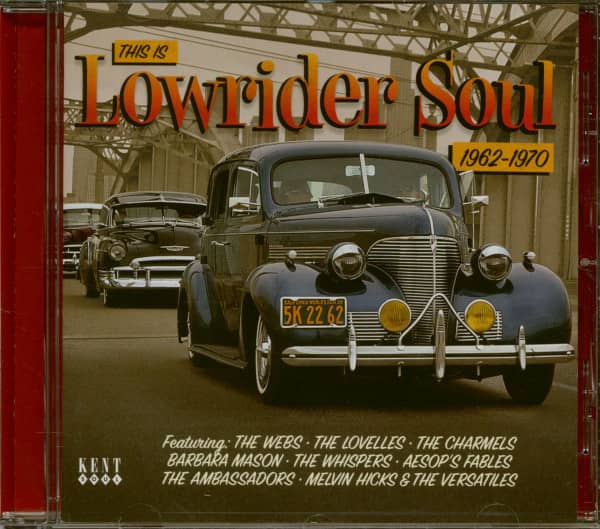 Sweet soulful sounds from the golden age – as adored in the clubs and classic automobiles of Southern California.

The Mexican, Central and South American immigrants who settled around east Los Angeles have long had an affinity for soul love ballads (aka slow jams). In recent times the scene they and their descendants initiated has intensified and spread to soul fans and collectors around the world, especially those already sympathetic to the music and intrigued by titles that were finding favour among the hip lowrider set.

The lowrider tag comes from the love of classic US automobiles which members of the scene customise to cruise the city streets. Sean Hampsey – DJ, promoter and owner of the UK’s Diggin’ Deep soul label – has teamed up with lowrider authority Ruben Molina to create Kent’s tribute to this style of music. In addition to writing The Old Barrio Guide To Lowrider Music, Ruben works with colleagues Arlene and Josh in the Southern Soul Spinners DJ team around their Southern California heartland. The SSS have also contributed titles and spirit to this compilation.

Spanning the years 1962 to 1970, the music here moves from the doo wop sound of the Vows to sweet soul harmony ballads such as the Four Tees’ ‘One More Chance’. Lowrider classics are provided by the Whispers, Barbara Mason, the Ambassadors, Brenton Wood and Lee Williams & the Cymbals, most of which are already quite well known in Europe. Brenton Wood in particular has an amazing knack of producing just the right type of music for the lowrider scene.

More esoteric picks are provided by the Endeavors, Aesop’s Fables, Jimmy Conwell and the Interpreters. We suggested some previously unreleased masters to the selectors, who were knocked out to include Melvin Hicks’ ‘I’m Just Passing Time’ and the Lovers’ Bay Area-recorded ‘When You’re Poor’; their inclusion here has caused a buzz on both sides of the Atlantic.

Other highlights are brilliant but not widely known titles by William Bell (backed by the Astors), the Lovelles, Jeff Dale and the Attractions. The Charmels, Webs and Reuben Bell tracks have become hot items among the European collecting fraternity in recent years, with the rapidly rising price tags that go with that. All in all, this release is destined to be appreciated by lovers of all types of black music, particularly those with an ear for a beautiful soul ballad.