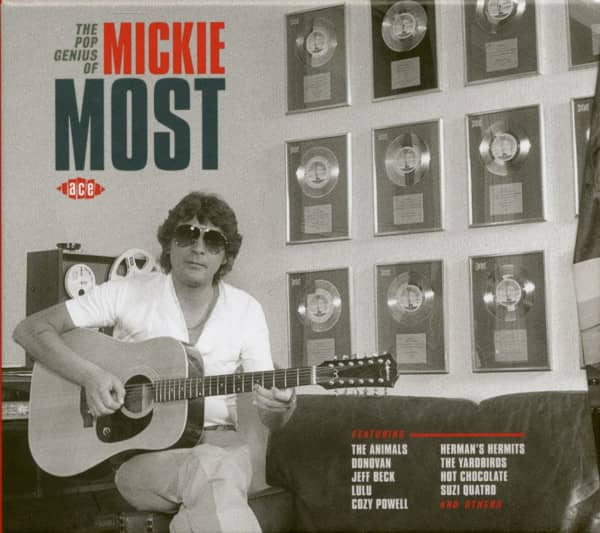 Various: The Pop Genius Of Mickie Most (CD)

(Ace Records) 25 tracks
Here then is a hand-picked representation of the man’s best or most significant work. Incidentally, both ‘I Love Rock’n’Roll’ and ‘Living Next Door To Alice’ are the original flop versions of songs that went onto become huge hits for Joan Jett and Smokey, respectively.
The CD comes in a deluxe package with rigid slipcase and a separate memorabilia-laden 72-page booklet with in-depth notes by Rob Finnis.
Record producer, hit-picker extraordinaire, entrepreneur, TV talent show pundit, pop mogul Mickie Most was a man ahead of his time, anticipating the workings of modern media before the internet made it all happen. This is the soundtrack to his story, told in rich detail in a picture-packed 72-page booklet.

Making hits seemed all too easy for producer Mickie Most who owed his success to an extraordinary ability to spot a hit tune, combined with unbridled common sense. Most never got his motives confused with art; a hit by any means (with as little time as possible spent in the studio pondering the meaning of life) was his objective and he proved remarkably astute at second-guessing the musical tastes of the common man or woman.

Once described as ‘the first of the working-class dropouts’, Mickie and a school pal, Alex Wharton, one year younger and somewhat in Mickie’s thrall, fetched up in Soho in time to witness the first stirrings of British rock’n’roll. It was a time of smog and snow with a little bit of colour leaked back through the kaleidoscope of Hollywood cinematography. Mick Hayes was already dreaming of better things. “James Dean was the role model - and he certainly was for me. In my mind, I was already living in Hollywood while most people were living in Cricklewood.”

The pair began hanging out at the 2i’s coffee bar in Old Compton Street which, thanks to some timely publicity links with Tommy Steele, gained the ascendancy as the focal point of the yet-to-coalesce British pop scene.

Having launched the career of the ill-fated Terry Dene, 2i’s owner Paul Lincoln brought Mickie and Alex together as the Most Brothers, a British imitation of the Everly Brothers, even though the pair could barely play their guitars or harmonise in the proper way. A Decca recording contract left Mickie giddy with elation. “I walked around with that contract in my inside pocket for about a year so I could show it around. I mean, how many people made records in 1957? Not many. I thought I was one cool kiddie! They broke up in December 1958. Mickie had met and fallen in love with a South African girl who was holidaying in the UK with her parents. Such was the attraction, that Mickie emigrated to South Africa where the couple were married.

South Africa did have two things going for it: fabulous weather and a lack of indigenous rock’n’roll, the latter due in part to the Afrikaner state’s antipathy to what it perceived as a malign cultural influence. Mickie formed a rock band; “Audiences had never seen a bass guitar or amplifiers. I made a huge amp for our stage act with two 18-inch speakers. When the kids saw it, they were amazed.” They’d never seen rock’n’roll as we were doing it. We made a lot of hit records there; they weren’t any good but there wasn’t anybody else!” Autonomy had allowed him to acquire some basic A&R skills.

Most arrived back in the UK from South Africa in 1962 in time to take advantage of the fast-changing British music scene. Sensing his early career as a rock’n’roller was at an end, he became an independent producer, supervising smash hits by newcomers the Animals, the Nashville Teens and Herman’s Hermits, all within the space of a few months in 1964. American record companies sat up and took notice and, with his career in the ascendancy, he extended his run of hits on both sides of the Atlantic with artists such as Donovan, Brenda Lee, Lulu and Jeff Beck.

In the 1970s, he became a household name as one of the judging panel on New Faces, a TV talent show which anticipated the X Factor by some three decades – in fact, Simon Cowell cites the fair-minded if plain-speaking Most as a man he greatly admired. In 1970, Most launched the RAK label which quickly made its mark with hits by Julie Felix, Peter Noone and CCS, followed a little later by Mud, Hot Chocolate, Suzi Quatro and Smokey. Incidentally, ‘I Love Rock’n’Roll’ and ‘Living Next Door To Alice’ are the original versions of songs that went onto become huge hits for Joan Jett and Smokie respectively.

Here then is a hand-picked representation of Mickie Most’s best or most significant work, packaged in a rigid slipcase containing a memorabilia-laden 72-page booklet with in-depth notes.

Article properties: Various: The Pop Genius Of Mickie Most (CD)