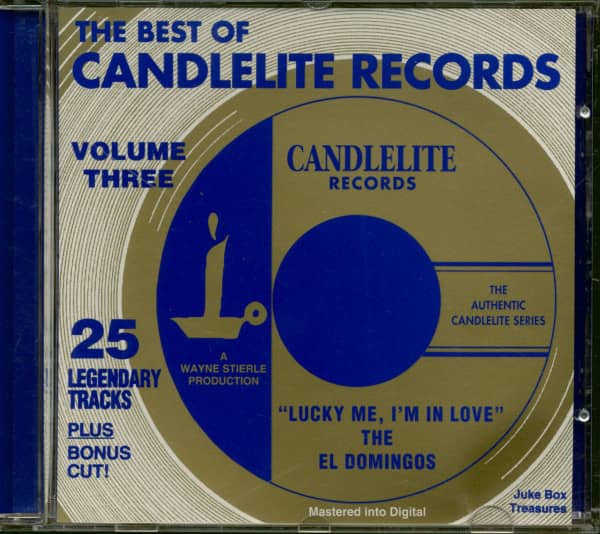 (Juke Box Treasures) 25 tracks
-
When I started Candlelite Records, my goal was to start a record company, which was what I had dreamed of doing ever since realizing that I wasn't cut out to be a rock n' roll singer. I kept on with my song writing and producing sessions, but noth-ing was as "real" as putting out a 45 rpm single record. The record was right there, and you could see it. It wasn't just an idea, it was a real object that existed. Candlelite Records was the first "all oldies" label in the world.

I walked down the stairs that went beneath The Times Building in Times Square. and stopped to look at the record sleeves taped on the window of Times Records. and then I opened the door. "Hey, Wayne, what have you got there"? I had a one hundred box under my arm, and the person asking was "Slim". I put the box down, opened it, and handed him a red plastic copy of my first record, which I had picked up at the pressing plant in New Jersey, only hours earlier. He looked at it, put it down and had some toast, and picked it up again. He still didn't realize that it was my label, and he was trying to figure out what it was. Finally he played it, and said it was "cute", which was what "Slim" called up-tempo records that had a crazy theme.

In other words, he liked it. He handed it to Harold, and said, "Write this up Harold", which in "Slim" talk meant that Harold should make up a sleeve and put it on the wall. He handed me some string and asked me to add it to the ceiling, where a group of records hung down from the ceiling on individual strings. As I hung it up the store rumbled as the subway ran by. It was a highlight for me. (That first record hanging there was captured on film in the few photos I took at the store).

It is very hard to explain why this was so exciting, and so I can only tell you that it was the very begin-ning of the "oldies scene" in rock n' roll, and that those days impacted all the years to come, and all the "oldies" releases and all the shows and concerts. It was a crazy scene that had a global impact. (Wayne Stierle)