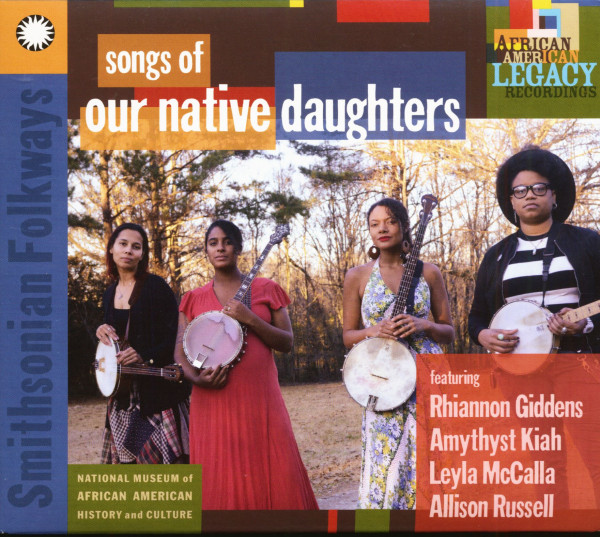 (Smithsonian-Folkways) 13 Tracks - Deluxe Digipack - 36-page color booklet -
''Our Native Daughters'' is the union of Rhiannon Giddens, Leyla McCalla, Allison Russell and Amythyst Kiah to oppose abuse and discrimination of African American women with authority and pride.
The four African American female singers and banjo players engage in an admirable struggle for gender, race, slavery, sexual assault and male supremacy. The result of their collaboration is a proud, devastating and respectful album that seems made for today.
The quartet was founded by Rhiannon Giddens, who was nominated several times for the Grammy for her solo project and was awarded together with the "Carolina Chocolate Drops", which she once co-founded. She has also received the MacArthur Fellowship Program Award and the Steve Martin Prize for her outstanding contribution to bluegrass and banjo music. The group is complemented by country and blues singer Amythyst Kiah from Tennessee, who knows how to use her rich voice. Leyla McCallaist, whose parents come from Haiti, uses Creole and Cajun traditions as her primary language and repeatedly addresses modern socio-political problems in her lyrics. Singer and multi-instrumentalist Allison Russell comes from Canada and adds her own timbre with a strong voice.
By picking up early traditionals and old banjo music and transforming them into the here and now, the four musicians often focus on unheard and silent stories of their ancestors. The stories of the past also appear lively and topical today. The material for "Songs of Our Native Daughters" - written and sung in varying combinations - is based on stories about New World slaves, widespread discrimination and the effects of these on American life. Her inspirations include the Haitian troubadour Althiery Dorval, "Mississippi Hill Country" violinist Sid Hemphill and many more.
Our Native Daughters sound profoundly fascinating and stirring when the four different voices collide, interweave and simultaneously step aside to make room for each other. The four singers have succeeded in creating an album that is as important as it is beautiful, taking the listener by the hand in dark passages to amaze them in bright moments!