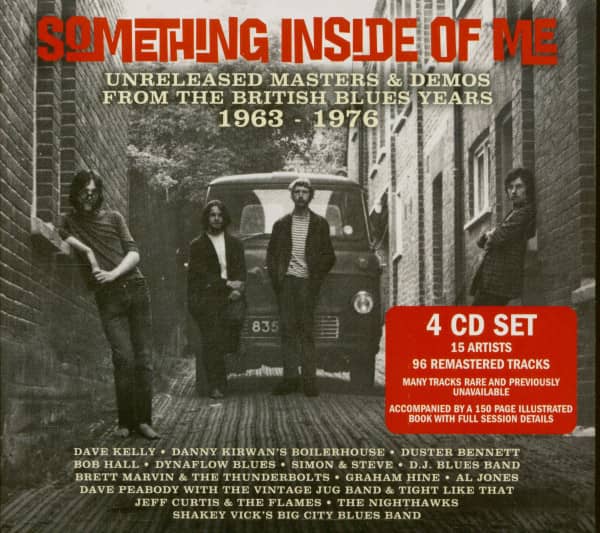 Various Artists: Something Inside Of Me (4-CD)

(Wienerworld) 96 Tracks - Unreleased Masters and Demos from the British Blues Years 1963-1976
Something Inside Of Me' brings to the surface ninety-six unreleased recordings from fifteen artists who were all at the forefront of the burgeoning British blues scene of the early 1960s to mid 1970s. There is a varied range of performers with diverse styles that represented the spirit and soul of this music. Soloists, duos, trios, jug band acts and fully-fledged blues and rhythm and blues bands.

A 150-page book accompanies the set. It is fully illustrated with most of the images having never before been published, and contains chapters especially written by the artists themselves who are included in this release. Full sessionography details and posters from the period are included, many reproduced here for the first time. 'Something Inside Of Me' is a unique collection of music, words and pictures from this underground world of music that spearheaded the giant UK blues scene that was to follow.

The title of this anthology, taken from one of Danny Kirwan's The Boilerhouse tracks, perhaps quite appropriately sums up a feeling that British blues performers had about the blues. At the time these players eagerly adopted, even for their own compositions, self-styled versions of Black American imagery and lyrics. So, Mojos working, Hellhounds, Hoochie Coochie Men, Gypsy Women and Mannish Boys were creatively reinterpreted.

When the US blues legends toured these shores to perform, sometimes accompanied by British players, it added to a wider understanding and appreciation of the hard lives of their mentors. As older players, some were of similar age to their parents, although considerably more hip! As Texas blues player Curtis Jones called out to the Dynaflow Blues Band just before they accompanied him at Bath University, "Let's jive!"

Article properties: Various Artists: Something Inside Of Me (4-CD)