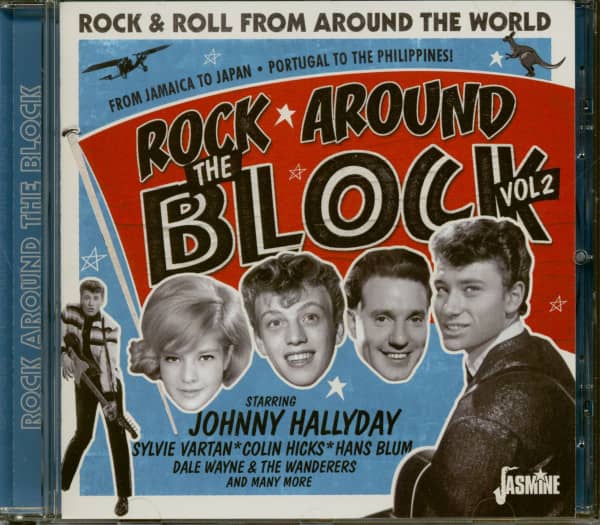 Various: Rock Around The Block Vol. 2 - Rock & Roll from Around the World (CD)

Jasmine's second global musical vacation leaves from Gatwick and, after a swinging time with Tommy Steele's brother, Colin Hicks, touches down in Gay Paree for a visit with teen-idol Johnny Hallyday, the Franco Elvis. Changing planes for a swing across the Atlantic, we land in Mexico before a long flight to Australia. Without rest it's on to Jamaica and a brief bustle with Blue Beat boys, Ernest Ranglin and Owen Gray. No time for overnight stays because we're on to Denmark, France and Germany with a brush with Hans Blum and his perfect cover of 'Charlie Brown'. Next stop Japan for Keijiro Yamashita before heading out for Cuba to meet with the legendary Los Zafiros.

No time for chilling 'cause it's out to the Philippines to take on the Rocky Fellers who also made a big noise in the U.S. With brief sleepovers it's on to a return visit to Europe and a taste of Portugal's excellent Conjunto Jorge Machado. Survivors will finish this whirlwind, dizzying holiday with an additional short return to Mexico, winding up with the infectious Palm-wine music over in Sierra Leone performed by S.E. Rogie.

On Volume 2 you will find 33 examples from 13 rock & roll-infected countries recorded back in the day when the swing era generation thought that this new and loud rock & roll was a passing fancy. What they really meant was they hoped that by dealing with the problem of so-called juvenile delinquency, they would be able to stamp out the rebellious sounds that symbolized the teenagers' own personal search for freedom.

This eccentric yet appealing collection is the perfect companion to Jasmine's first volume which is rather predictably titled, 'Rock Around the Block Vol. 1' - CDJAS985.

Article properties: Various: Rock Around The Block Vol. 2 - Rock & Roll from Around the World (CD)