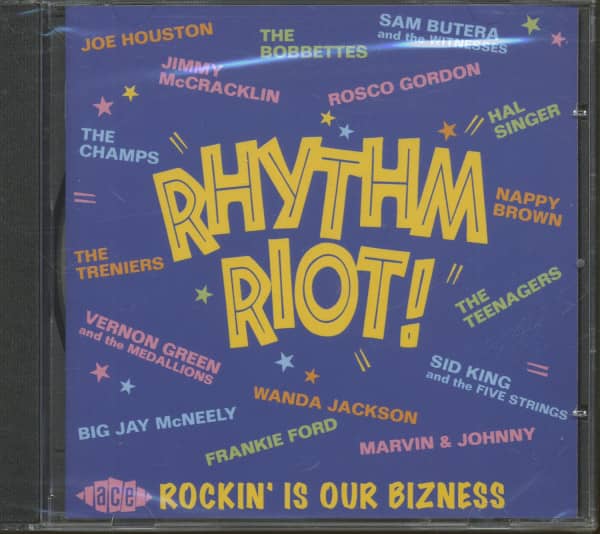 P Secure bonuspoints now
Description
Learn more about Various
Review 0
Description
(Ace) 25 tracks It's unlikely that anyone with even the remotest interest in vintage R&B and... more
Close menu

It's unlikely that anyone with even the remotest interest in vintage R&B and rock'n'roll will have not heard of Rhythm Riot. There may be several other notable r'n'r weekenders dotted around the UK and Europe - and, increasingly nowadays, the rest of the world - but there surely aren't many that rank as high on the must-attend list as does RR's yearly November shindig. Rightly so, too, as the Riot is arguably the premier celebration of quality 1950s music that can be found anywhere in the world today. Organised with a mixture of collector's passion and consummate professionalism by Rockin' Robin Weathersbee and his team at Maddy's Jiving School, the Riot sets the standard that all other similar events should aspire to at all times, hard though that might sometimes be."
Now, Ace has to admit to a small degree of bias over RR. We have to, really - our name is emblazoned across their on-stage backdrops as sponsors of the event, after all. But Ace wouldn't be involved in any capacity if it didn't think RR was something worth supporting.
One of the key factors in RR's ongoing success is the extraordinary length that Robin and his colleagues go to in order to provide the live entertainment to go with the rockin' records that will be spun over a weekend. Many important names in R&B and r'n'r have made their UK debuts at the Riot (and will continue to do so in 2002, with Tommy 'Weepin' And Cryin' Brown and Jimmy Cavello being among this year's RR debutantes). This is mostly due to the unflagging enthusiasm and very persuasive manner of the affable Mr W, who of course wants to see his heroes on stage as much as do the Riot-ing masses!
As anyone who's bought one of Ace's three JIVING JAMBOREE sets will be aware, when Robin's not busy organising Rhythm Riot or any of the other associated Maddy's functions - the regularly-held JJ events themselves being one of many other Maddy's enterprises - he also puts together a pretty nifty compilation or several when time permits. And to coincide with Rhythm Riot 2002" Robin's come up with a cracking CD that pays tribute to those who've captivated the Riots attendees with their live shows over the past few years - many of whom are, sadly no longer with us. (Indeed, some have passed away during the course of bringing this package together, including two who were originally scheduled to appear both at this year's function and on this CD, Arthur Lee Maye and Boyd Bennett).
Ace's RR CD features at least one hot rockin' track (plus a few bonuses!) by every notable American act who will have appeared there by the end of this November's 'do' - an amazing 21 in all. These range from Jimmy McCracklin to the Crickets, and Hardrock Gunter to the late Rosco Gordon, so you know the music is going to be great even in the unlikely event that you won't already be familiar with most of it (and there's an outside chance you won't be totally, as several of the tracks have never been legally on a UK CD before!)
You don't have to be at Camber Sands in November to enjoy what's on offer here (and by the time you read this it will have been and gone anyway so you'll just have to wait 11 months for the next one!) But whether or not you can be there in person, you can have your own Rhythm Riot in the confines of your own home anytime you slip this CD into the machine. It's Rhythmic. It's Riotous. And to quote from the songbook of just one of its featured artists, the Treniers - "It Rocks, It Rolls, It Swings"...
By Tony Rounce"