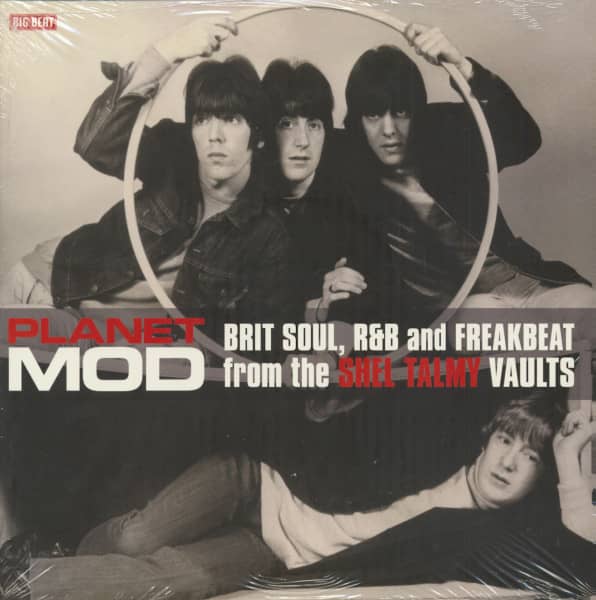 A caveat: not everything on 'Planet Mod' actually appeared upon, or was even recorded specifically for, the fabled imprint Planet Records. Nor are its contents wholly produced by Shel Talmy. Some were purchases, others part of collaborative agreements. But if not produced byTalmy, the tracks in question were enabled, approved or selected by him, and they all fall under a general remit that has since become very much associated with the man and his work.

Shel Talmy is the name any discussion of the stewards behind British rock's mid-60s purple period will immediately bring to mind. If it were only for his early supervision of the Who, he would still remain a mod hero. Add the dozens of other records and artists - from best-sellers such as the Kinks to obscurities along the lines of the Mickey Finn - that Talmy was involved with, and his role in bringing forth the most powerful examples of the mod genre becomes unequivocal. Even a venture that was ostensibly a failure Planet - has acquired semi-mythical implications amongst the mod cognoscenti, thanks in part to its association withTalmy's great white hope, the Creation.

For the first two years he worked in England, Shel Talmy was essentially a staff producer for Decca.Yet, in time, the experience of his prior apprenticeship in Hollywood, the confidence a frisson of early hits gave him, and the man's own inability to suffer the foolishness of his superiors ledTalmy to not only become an independent, but to found his own production company.

Orbit-Universal was established in early 1964, and it is under the auspices of that organisation that the contents of this collection were made. Talmy signed artists and writers for recording and management, produced masters to lease to record companies both in the UK and abroad, and stockpiled repertoire for an independent venture he felt certain could succeed.  He and business partner, promoter Arthur Howes, launched Planet Records with much fanfare in late 1965. It ground a halt barely a year later, the blame laid firmly at the feet of Planet's distributor. Philips Record.s.

Attorney Marty Machat had arranged for the label to be handled in the United States, and even as late as early 1967, Planet was still considered a going concern byTalmy, who hoped he could switch his UK distribution to EMI. Today, the label's black and white iconography remains a potent symbol for the incandescent excitement of the British pop scene in 1966.

We should also add that the material featured on 'Planet Mod' runs the gamut of the modern musical interpretation of the mod genre. The core of 1960s modernist taste was always black Arnerica, but in recent decades the voracious appetite of genre practitioners has led to rock, homegrown soul and even pop getting squeezed within mod's defining parameters. Certainly, several American artists are represented, including two of acknowledged greats of US R'n'B. Also, in a scenario that is all too frequent for Talmy, there is at least one future superstar within the assembled cast. And on the other side of the coin, we have early, unsuccessful yet exciting recordings from two vocalists who would go on to have massive UK hits in the 1970s and 1980s, albeit with essentially family-friendly fare. Even within the terms of our brief, the playlist reflects the diversity of the Shel Talmy discography.