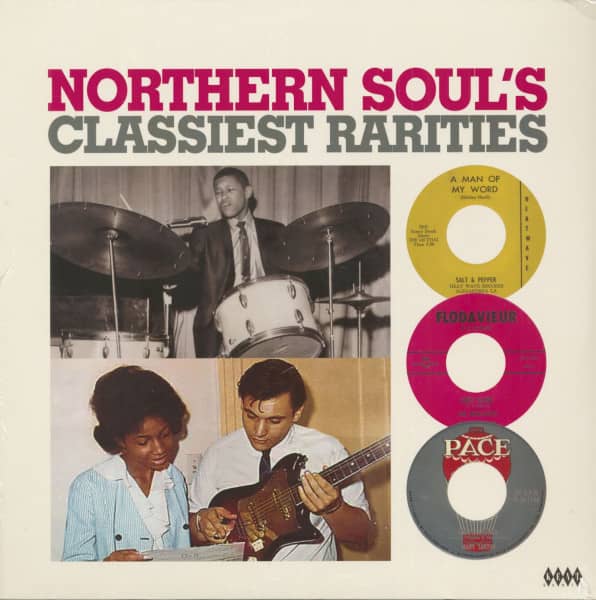 Kent's Northern Soul's Classiest Rarities series has showcased high quality soul dance records from the 60s to the early 70s, beloved by collectors and dancers who have had their fill of the 'Top 500'. Of the 144 tracks we have issued in the series, only three actually feature in the lower reaches of that list. This was not intentional, but is representative of the type of record we have championed.

Several of the tracks we have chosen for this LP were played at the famous Northern Soul venues of yesteryear. Marva Holiday's brilliant reading of Sherlie Matthews' song 'It's Written All Marva Hol4h, Over My Face' would surely have been bigger, had it not quickly turned up in quantity. The immediate demand was satisfied, and it was dropped from playlists before its merits were appreciated. Similarly. Darrow Fletcher's Detroit-produced 'What Good Am I (Without You)' was lost in the waves of discoveries in the 10s, and has taken a few decades to resurface as a guaranteed floor.-filler.

The headline tracks on our various CD volumes are undoubtedly the tracks that have proved elusive and have built in popularity over time. The Antellects' 'Love Slave' was a discovery by the 100 Club DJ Shifty in the 90s. We were fortunate to find the eponymous label owner Flodavieur Polk, Dave Polk's daughter, and have since issued many of her father's great soul and jazz sides. The Salt & Pepper story was even more intriguing a multiracial group of US GIs stationed in Bangkok, who got together to entertain their fellow comrades and local tourists. They rustled up enough money to have a single pressed up, using graphics from member Tony Nardi's earlier group the Cheques' record out of Louisiana. Though it looks like a US 45, they pressed the 250.500 run in Thailand; hence a horribly scarce record that took so many years to find, before becoming  a rare soul standard.

Karmello Brooks' jazz-infused 'Tell Me, Baby' now fetches a similar price 1 in the lower thousands of pounds. It is a glorious recording, although I do slightly regret selling two mint ones for £40 in the 90s when it hadn't quite taken off. Other lottery winner favourites are Ty Karim's superbly catchy 'You Just Don't Know', Eddie Whitehead's soulful floater 'Just Your Fool', and the poppy stomper 'Losing Control' from Mary Saxton, a white teenager who is the vocal double of the more seasoned Tina Turner.

The unlikely soul centre of Cincinnati was the birthplace of Eddie Whitehead's creation, and of the classic soul group vocals of the Imaginations, whose take on 'Strange Neighborhood', originally recorded by Gene McDaniels and by Tommy Hunt as 'New Neighborhood'. ups the tempo and found favour among Northern Soul dancers before big ballads came into vogue. Speaking of catchy, do they come any bouncier and more charming than West Coast lark Pat Powdrill's 'Deft'? It may bested fast for soul collectors' ageing limbs. but it still thrills with the exuberance of youth. The Houston Outlaws' 'Ain't No Telling' on Detroit's Westbound Records is memorable in a subtler way. with a bittersweet melody that creates the perfect setting for the group's accomplished vocals. With Troy Dodds"Try My Love', it's the haunting atmosphere that dorninates, his moody vocals abetted by a superb female backing group.

It wouldn't be a Northern Soul's Classiest Rarities release without sorme master tape magic. Dodds' fellow Bay Area singer Jeanette Jones cut an LP's worth of material for Golden State Recorders, yet only one single was issued on US Kent at with the Kent LP 'Dreams All Cm oe True' (HIQLP 047). The stand-out stomper 'Cut Loose' has been played at the 100 Club all-nighters since the late 90s, and made it to a now deleted and very expensive Kent Select 45 in 2000. More recently we acquired the Fidels' version of the Puffs' Dore sleeper 'I Only Cry Once A Day Now', a record that has risen in esteem and value over the last decade; so how much for an original acetate of the revered West Coast group the Fidels' version as featured here? NB I don't know of one, but if! Enjoy this strong selection in a classic Kent LP format and if you've avoided digital up to now, remember there are another 130 equally fine tracks out there waiting for you on CD.