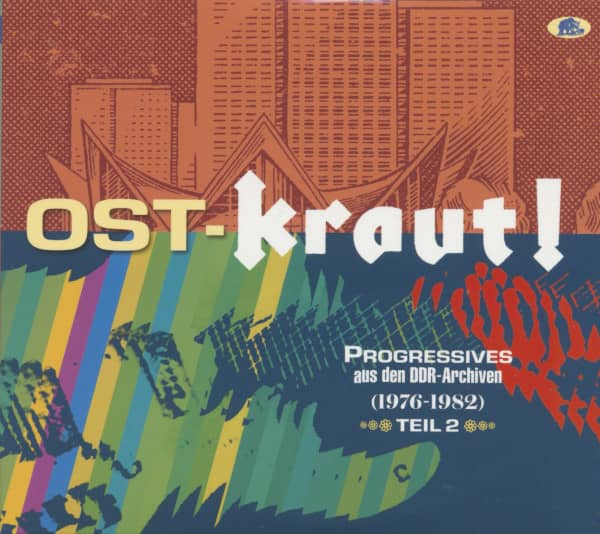 OST-KRAUT: A two-volume double CD series -- the long overdue complement to our KRAUT! edition -- comprehensively documents the history of progressive rock in the GDR for the first time with studio and live recordings!

2-CD (digisleeve) with 76-page booklet, 28 tracks. Total playing time approx. 140 min.
PLEASE, NOTE: liner notes in German
After the tremendous success of the four-volume edition 'KRAUT! The innovative years of Krautrock 1968 -1979' on Bear Family Records®, it was obvious to also honor progressive music from the former GDR for the first time in a similarly elaborately designed, two-part CD edition!
While the first volume covers the history of progressive rock music in the GDR between 1970 and 1975, the second part deals with the period from 1976 to 1982.
The second half of the 1970s and the early 1980s see the AMIGA concept albums of the Stern-Combo Meissen ('Weißes Gold', 'Reise zum Mittelpunkt des Menschen'), electra's one-and-a-half LP side-filling homage to the Sixtinische Madonna, the fifteen-minute art and jazz rock synthesis Meeresfahrt by LIFT and, of course, City's mega hit Am Fenster, which also stormed the charts in Western Germany and Greece, among other places.
Certainly inspired by the legendary Tangerine Dream show at the Palast der Republik in 1980 and its release on an AMIGA LP, a new genre of music developed, which in the GDR was labeled 'electronics' by the media.
This meant instrumental tracks that were composed and performed - using exclusively electronic instruments - mostly by a single artist.
Often the concepts of these (mostly overlong) compositions were created during months of tinkering in private and home studios of musicians, which became more and more established - much to the suspicion of the monopolists radio and records.
In 1982, AMIGA released Reinhard Lakomy's 'Das geheime Leben', the first 'electronics' LP, followed by others in the years that followed.
The spillover of the New German Wave into the GDR (labeled there as 'New Dance Music') led to stylistic uncertainty and hectic lineup changes for many formerly progressive bands starting in 1982.
Progressive rock music in the last five years of the GDR took place almost exclusively in the musical underground or semi-legal gray areas, as part of a scene that was eventually dubbed 'The Other Bands' by the media and - carefully filtered - also produced and broadcast in nightly niche programs.
The second part of the edition 'Ost-Kraut - Progressive Kost aus DDR-Archiven' gathers on 2 CDs the crème of the then rock scene from the GDR and the former socialist foreign countries with recordings for AMIGA and the Deutsche Rundfunkarchiv (DRA).
All titles were recorded between 1976 and 1982 and have been stylishly and competently compiled by East rock connoisseurs Marcus Heumann and Christian Reder.
The 76-page illustrated booklet, richly furnished with rare photos, describes and appreciates them in detail.