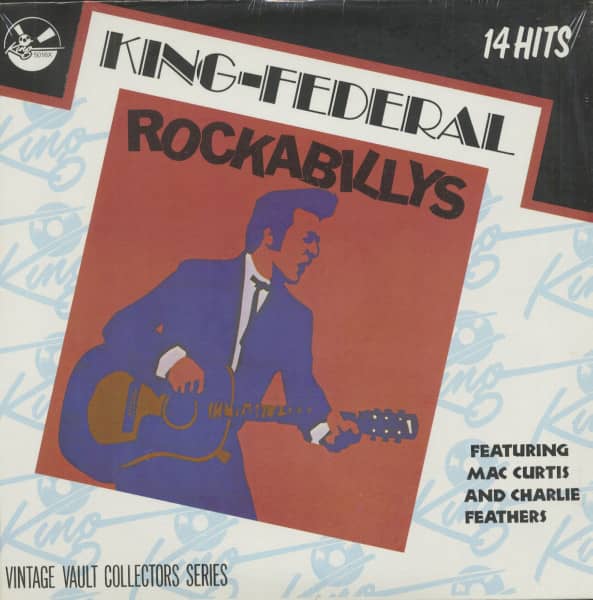 (King/Gusto) 14 tracks, original recordings taken from the original mastertapes! A timeless rockin' compilation from the year 1978


In the middle fifties, perhaps spurred by the success of Elvis Presley and other country oriented artists who were making inroads in popular music, King/Federal issued some rockabilly recordings. Although these records didn't become large hits when they were issued, today they are sought after collector's items and valued at up to fifty dollars per copy. Many of the artists are largely unknown today.
Hank Mizell was 'discovered' when 'Jungle Rock' became a freak hit in England in 1976 and went back into the studio for the first time in twenty years to record material and got a story in the 'Rolling Stone' Magazine. Mississippi born Charlie Feathers was signed to the Sun label in 1954. Although Charlie's recordings for 'Sun' were more country than rockabilly, he formed an association with Presley which probably influenced Charlie to record more rockers and Elvis to record his 'I Forgot To Remember To Forget'. Charlie teamed up with Jerry Huffman and Jody Chastain to record one record for the 'Meteor' label and reportedly one each on the 'Lone Star' and 'Duane' labels. In 1956 Charlie Feathers and his musical Warries signed with King where they recorded and released eight sides. Charlie has continued to perform and release records sporadically on small labels.
Mac Curtis was a more successful recording artist for the King label for which he recorded sixteen sides. He grew up in a rural area of Texas and did a lot of touring during his early career with King. Mac has remained active as an artist; has recorded for almost a dozen labels; and had a string of country hits in the late sixties and early seventies on the Epic and GRT labels. Mac now lives in the Los Angeles area where he has also worked as a country music disc jockey.